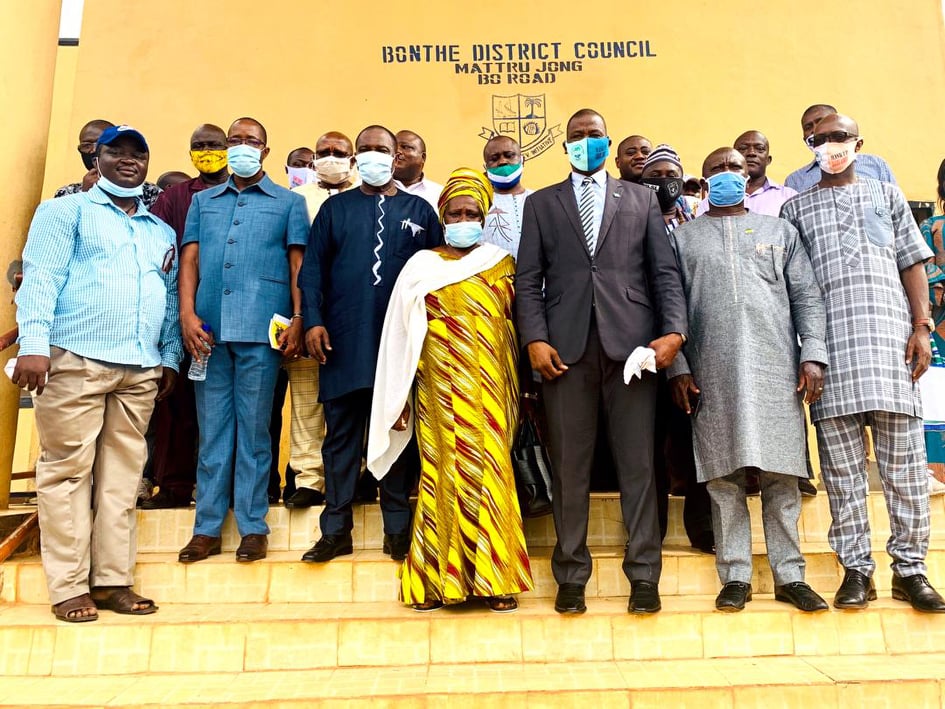 At the Bonthe District Council Hall, Mattru Jong on the 27th August 2020 residents of Bonthe District presented three (3) key district priorities to the Government of Sierra Leone, through the Ministry of Planning’s nation-wide popularization and decentralization of the Medium Term National Development Plan (MTNDP 2019-2023).

The key priorities which include, order of priority: Roads, Agriculture and Energy came as a result of a technical session conducted on decentralizing ownership of the plan for effective
implementation and results of the “New Direction” development targets across the country.

Presenting the district priorities, the Paramount Chiefs of Bonthe District aid the people of District had made their views clear on their development priorities and wanted the Government to take serious consideration in prioritizing projects within the highlighted sectors.
The PCs noted that the Bonthe people would continue to support through effective monitoring and coordinating implementation of the the plan in Bonthe District.

His Worship, the Deputy Mayor, Mohamed Robinson stated the importance of the engagement to Bonthe District noting that the engagement demonstrates Government’s commitment in ‘leaving no-one behind’ in the development process of their localities. He thanked the Ministry for coordinating the process and ensured their support and participation in implementing the plan in the district.

On his part, the Bonthe District Council Chairman, Moses Jude Probyn, underscored the importance of the engagement to the District. He said such process demonstrated Government’s commitment to leaving no one behind in the actualization of the New Direction Agenda.

Delivering an overview of the process, the Deputy Minister of Planning and Economic Development, Dr. Robert Chakanda said the journey to prepare the plan started over a year ago with wide consultations across the 16 districts nationwide. He said the plan drew a lot of direction from the New Direction Agenda of President Bio’s Government which is people-centered.

The Chairman of the Development Committee in Parliament, Hon. Musa Fofanah called for greater participation of the process, which he said was a step in the right direction. Hon. Fofanah said the Bonthe people should take complete ownership of the development aspirations in the district; emphasizing the need for continuity in governance and pledging Parliament’s support to the MTNDP (2019-2023).

In his statement, the Minister of Information and Communications, Mohamed Rado Swaray appreciated the District for their commitment to supporting the Government. He said  the Government is working hard towards ensuring that effective communication mechanisms are restored all over the country, especially the 30 Million dollars loan for the 2nd phase of the fiber-optic connection, which Bonthe would also benefit from this time.

The Minister of Water Resources, Philip K. Lansana, noted that Government is committed to ensuring that all cities and major towns get water facilities and that 7 district headquarter towns have already been identified for a start to benefit from the project. Mr. Lansana said due to the neglect the District had seen for years, priority has been given to them for the construction of water facilities throughout the district. He said contractors were already
in the Bonthe City to restore water in Bonthe.

The Deputy Minister of Energy, Dr. Eldred Taylor, in his statement said among other commitments President Bio is fully committed to ensuring that all district headquarter towns are electrified. He said Bonthe District would be among the only districts to have two separate distribution backbone of the rural electrification project. Dr. Taylor noted that other settlements, including the home of President Bio, Tihun, would benefit from the proposed rural electrification project, currently under procurement processes.

Tamba Lamina, Minister of Local Government and Rural Development said the local councils and district authorities are critical in the implementation of the (MTNDP 2019-2023) in Bonthe; noting that it would strengthen governance in the district, which would be crucial to enhancing development in Bonthe. He called on the paramount chiefs and the Bonthe District Council and Bonthe Municipality to be at the centre of service delivery in the District.

In his keynote address, the Minister of Planning and Economic Development, Dr. Francis Kai-Kai expressed his gratitude to participants present for the engagement; noting that it demonstrated the Government’s commitment to ‘leaving no-one behind’. He said the plan would further empower the people in taking charge of development in the district.

Minister Kai-Kai said the plan reflected President Bio’s New Direction Agenda making sure Development was driven down to the districts. He said the District Development Coordination Committees (DDCC) would be set up to address development issues in the district and effective monitoring and evaluation processes would be followed in the
implementation of several development projects across the country.