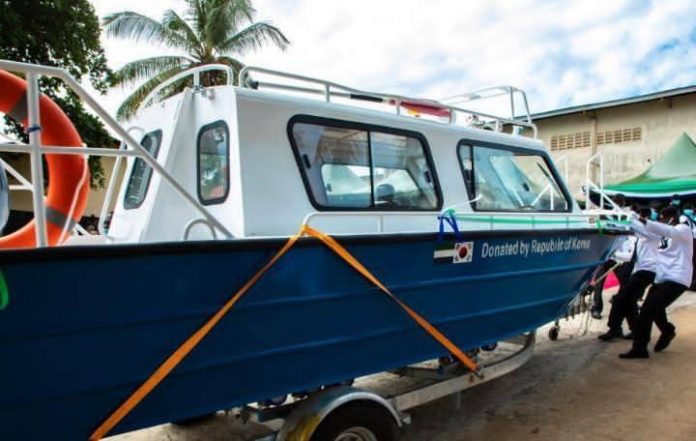 The Maritime Wing of the Sierra Leone Defence has taken control of four patrol boats that were donated by the Government of South Korea on the 9th November 2020.

The four boats were commissioned into service during a ceremony held at naval headquarters at White Man’s Bay in Freetown on the 22nd October, 2020. The commissioning was attended by President Julius Maada Bio, Defence Force Chiefs and the South Korean Ambassador.

Chief of Defence Staff General, Sullay Ibrahim-Sesay, said the new boats will boost the operational reach and capabilities of the Maritime Wing. He said presently, the Wing is hamstrung by the lack of proper training, financial resources and platforms.

He said the South Korean donation was delivered in time as the navy is struggling to secure its 200 km Exclusive Economic Zone against maritime crimes such as piracy, sea robbery and illegal, unreported and unregulated fishing.

“The rule of law is being undermined and this gift of patrol boats will leverage the flexibility of our forces in delivering the two main objectives of protecting national security and supporting development,” Ibrahim-Sesay said.

President Maada-Bio said the country will continue to explore areas of bilateral cooperation in defence with South Korea in terms of the Korea Africa Framework of Cooperation 2017-2021.

He said Sierra Leone loses an estimated $26 million annually to maritime crimes that plunder and threaten the viability of the country’s blue economy.

“There are threats to national security, food security, economic development and daily livelihoods of people in fishing communities. Small nations like ours cannot afford the loss and yet the costs are mounting daily,” he said.

While handing over the patrol craft, representative of the South Korean Ambassador, Kim Sung Nyeon, said, “Korea is proud to deliver four speedboats to Sierra Leone. It is our hope that today’s contribution will not only help Sierra Leone’s effort to build up its maritime capabilities, but it will also make our friendship grow stronger.”