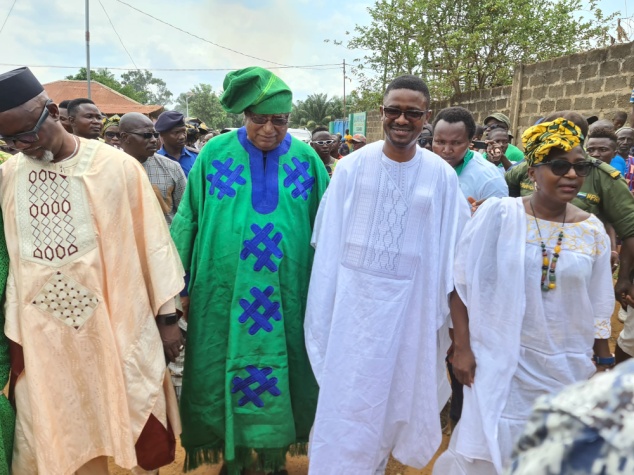 The current Deputy Minister of Technical and Higher Education, Sarjoh Aziz-Kamara, has called on the people of Njalahun Chiefdom and the entire Kailahun District to join forces in ensuring that the ruling SLPP wins next year’s elections and without President Bio going into a run-off with the opposition.

The former member of staff with U.N. peacekeeping operations in Liberia and South Sudan made that call in his hometown of Segbwema, over the weekend, during a welcome ceremony by the Paramount Chief and people of Njalahun Chiefdom to celebrate their appointments and thank President Brig Julius Maada Bio in his New Direction administration.

Others from the Chiefdom appointed by the President are John Benjamin, Special Presidential Adviser and Ambassador- at Large, Sierra Leone’s Permanent Rep to the U.N., H.E. Col. (Rtd) Fanday Turay and the Director General of Service Delivery, Office of the Chief Minister, Edward Kamara.

Recalling his childhood with a feeling of nostalgia, the Deputy Minister, Aziz-Kamara, stated that he is returning to the Segbwema playing field where the ceremony was happening this time as a Minister but that it was on that same pitch, he learnt how to ride a bicycle, to take part in sports meets and where he played and watched football as a kid.

He reminded the gathering that he was the humble son of a commercial lorry driver now in Government but with the determination to do everything in his power, together with his people in the Chiefdom and Kailahun, to ensure that the President is given a second term mandate in the elections in 2023 with no run-off.

Deputy Minister Aziz- Kamara, who served in the security sector, including as Head of Administration in the office of the U.N. Police Commissioner and Civil Affairs in Liberia, thanked the President for the privilege accorded him to serve in Government. “I feel very supported in efforts as part of the team to drive H. E’s vision and I have no regret coming to work for President Bio, “he stressed while also indicating that he believes and trusts the vision of the President.

Banking on a decade of experience in peacekeeping, the former Coordinator of UN Mission in South Sudan Field Integrated Office in Aweil, South Sudan, said he is ready to deploy his skills to solidify party unity and called on everyone to work towards a common goal.

He also highlighted the successes of the Bio administration, especially in one of its flagship programmes- education and said that things can only get better in all sectors of society if they all come together to deliver victory for the President and the party in 2023.

“If you cannot make peace do not spoil,” the onetime SLPP UK-I Secretary-General said and concluded by thanking his people for the traditional welcome. 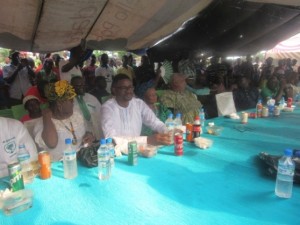