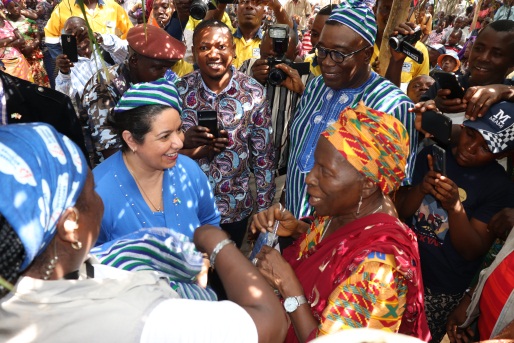 The U.S. Ambassador to Sierra Leone, Maria E. Brewer has joined Seawright Mining Company to commission a modern cold room facility constructed and donated by the Company for the people of Gorama Mende.

In her key note address, Ambassador Brewer expressed happiness for being part of the commissioning of the facility and described it as part of the Company’s Cooperate Social Responsibility (CSR) to the community.

She pointed out that the cold room is just one of the projects in Seawright Mining operational areas as the first cold room in Kono created more opportunity for local businesses to grow adding that the newly constructed cold room in Kenema will having a fishpond.

She emphasised that if every international investor in Sierra Leone made exhibis similar commitment to the local communities, sustainable economic development will be a reality.

“One of the primary goals of the U.S Embassy is to work together for sustainable development. We want to increase our commercial relationship and create attractive climate for international investors. This will promote employment,” she noted.

She concluded that they are looking forward to the success of the cold room and all other projects being undertaken by Seawright Mining.

Paramount Chief of Gorama Mende, Haja Mariama Kanja expressed that she is the happiest person in Sierra Leone as what she promised her people is yielding fruits.

She thanked the company for keeping to their promise and for transforming her chiefdom with modern facility.

Chief Executive Officer of Seawright Mining Company, Dr. Alfred Seawright expressed joy to be with the people and maintained that all what is happening in Gorama Mende is made possible by the effort of the Paramount Chief, Haja Mariama Kanja.

He stated that he is doing what he promised her for the community.

Dr. Seawright explained some of the work the company has done in that community such as construction of schools, pure drinking water wells, training of teachers and school feeding program among others.

He also reminded his audience that the company is on exploration stage and they have not made any money since they started operations.

He emphasised that the Company don’t talk politics, neither entertains any form of corruption, they work as a team because they don’t build by talking but by action as Sierra Leoneans are managing the affairs of the company.

He disclosed that the community will get fishpond to ease their stress of importing fish and promises to construct the first secondary school in the chiefdom.

Chairman Kenema District Council, Mohamed A. Sesay described Seawright Mining as a credible partner for sustainable development they have been looking for.

He thanked the company for a wonderful job done.

He stated that such development is not only meant for their district but for Sierra Leone as a whole.

He encouraged the community elders to employ effective people in order to ensure that the project benefit the chiefdom not individuals.

Senior Mines Compliance Officer, Christiana Samba said what the company has done is to complement the effort of the government. Through the cold room she added more job will be created.

Personal Secretary to the Paramount Chief, Ibrahim Koroma on behalf of PC Haja Mariama Kanja assured the company that the sustainability of the project comes first noting that they will put mechanisms in place to make sure it works.

He disclosed that Gorama Mende has 45,000 inhabitants and they have enjoy construction of community Barrays, schools, school feeding program from the Company which he described as one that served as trunk card for the company.

The cold room is equipped with modern facilities including generator, fish among others. Seawright Mining also donated text books and solar light equipment to schools in the community.