It is always said that good things come to those who wait and deserve them. Again it is said some are born great, some achieve greatness and some have greatness thrust upon them. With the exception of the last, the Chief Executive Officer of Orange Sierra Leone, Aminata Kane Ndiaye, is an embodiment of an exemplary figure, with a strong a personality whose palm kernels were not broken for her by any benevolent spirit but out of sheer hard work and her immense contributions to humankind she is today seating at the highest pinnacle of one of the leading telecommunications companies operating in the country, Orange Sierra Leone.

She received the prestigious 2019 Environmental Care Award given to her by Shout Climate Change Africa on the 23rd November 2019 at the Miatta Conference Centre during a well-attended programme. Under her watch Orange SL has participated extensively in environmental and corporate social investment, with such initiatives being a key pillar in the company’s role as a socio-economic upholder. Some of those include, but are not limited to: Obtaining an Environmental Impact Assessment License (EIA) from the Environment Protection Agency (EPA) in accordance with the EPA Act 2008.

It is on record that Orange SL remains the first company to secure an EIA license from EPA in 2018 upon the successful completion of an Environmental and Social Impact assessment study with its consultant, CEMMAT. The License is secured annually to ensure that Orange conducts its business responsibly guaranteeing that the impact of the activities of the Company to the environment is mitigated.

As a result-oriented personality, Aminata, is well known  as the first female telecommunications CEO in Sierra Leone who has led an illustrious career. Looking at some aspects of her background between 2009 and 2011 she worked as a consultant for McKinsey & Company in France, designing strategies and operations for telecommunication and technology providers, banks and consumer goods manufacturers in Europe and West Africa. That experience was invaluable, combined with internships at Goldman Sachs in London, BNP Paribas in Geneva, and at the French Business Confederation (MEDEF) in Paris.

Before moving to Sierra Leone as the CEO, she had previously been the B2C Marketing Performance Manager for Orange Sonatel in Senegal, in charge of strategy, sales and margin growth, return on investment, process efficiency, customer experience and loyalty retention. Following this she became the Chief Marketing Officer for Orange Money, a business that has grown exponentially in the past four years.

Aminata joined Orange SL (OSL) in April 2018. Since the inception of her role as CEO of OSL she has exhibited exemplary leadership in the Company with the following achievements:

As CEO of Orange Sierra Leone, the entity  also prides itself in giving back to society through its robust Corporate Social Responsibility (CSR) agenda. The Company amongst other factors considers the “Environment” as one of its CSR pillars. Consequently, the Company has undertaken several Environmental and humanitarian projects from 2018 to date as follows:

Impressively, with Aminata at the helm of affairs, Orange is the First Operator to pledge its support to the Government’s free quality Education Agenda by pledging the sum of 1.5million dollars in material assistance over a period of five years.  Through the said intervention Orange that is slated for implementation the following projects will rolled out from 2019 to 2023; 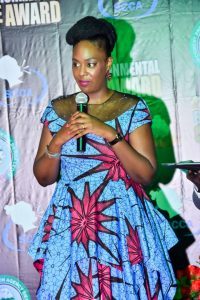