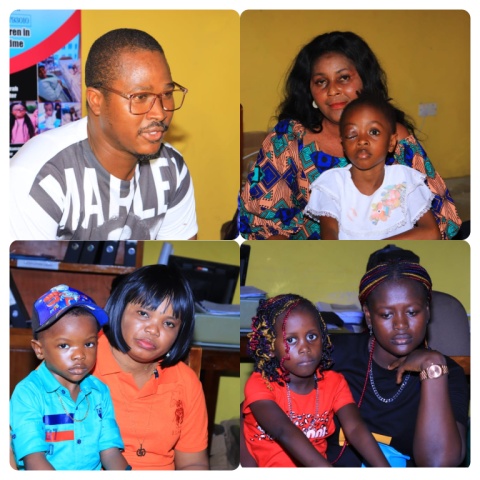 The Sick Pikin Project on the 11th May, 2022 welcomed four children who successfully undergone surgeries in India during an event which took place at its office situated on Savage Street in Freetown.

Stating the purpose of the event, the Co-Founder and Lead Campaigner of Sick Pikin Project, Ishmael Alfred Charles, said it is a usual practice for them to update their donors and the general public through the media about children that they facilitate getting medical attention abroad maintaining that such is for the purpose of accountability and transparency.

“We always make sure that before our child patients travel we normally inform the general public through the Fourth Estate. And upon their return also we present them back to the donors and the general public to ascertain the physically condition or status of the children,” he intimated.

He disclosed that the children travelled at different times and not as a group adding that Sylvia F. Kamara was diagnosed with Nibo fibromatosis, whose surgery, he said, was not completed due to medical advice. The term fibromatosis refers to a group of soft tissue tumors which have certain characteristics in common, including absence of cytologic and clinical malignant features, a histology consistent with proliferation of well differentiated fibroblasts, an infiltrative growth pattern, and aggressive clinical behavior with frequent local recurrence.

He further disclosed that Hawa Sesay was suffering from a Visio-fistula condition, stating how she underwent two surgeries. He also revealed that, Mary Sesay, which according to him, is a child with the oldest case since two years ago, was diagnosed with Kyfosis and has undergone surgery successfully.

“Abubakarr M. Kamara was suffering from a congenital heart disease. Abubakarr actually underwent a bloodless surgery and it was successful,” he said saying it means a device was used to close his heart.

He informed that they are presenting the children for the public to know that they did not only promise but they really did it.

The mother of Sylvia expressed how grateful she is to God, the Sick Pikin Project and all the donors who helped save the life of her daughter. She explained how her daughter started experiencing the debilitating condition at the age of two, when a small bump on her eyes escalated to something else.

“We succeeded in healing one of the eyes, but the other one got worse. My child was attending school, but dropped out because of mockery from her companions in school, and the school’s authority also advised that she stays at home because of her sick state,” she revealed.

She also intimated the Press that she is delighted because her daughter will start attending school again. She once more applauded the humanitarian entity and other donors for their kind gesture in helping her child to undergo the surgery in India.

Fatmata Haja Sesay, the mother of 6 year old Mary, said her daughter fell two years ago and since then could not walk. According to her, the child was first admitted at the Bo Government Hospital but was transferred to the Connaught Hospital in Freetown but lamented that her condition was not improving.

She further disclosed how they were able to contact the Sick Pikin Project which came to their rescue. Fatmata extended her appreciation to the organization and other donor partners that supported her daughter’s surgery in India saying she is extremely happy over the child’s recovery.

The mother of 3 year old Abubakarr expressed her gratitude to God firstly and the Sick Pikin Project for helping her son to undergo surgery in India.

According to her she was admitted with him at the hospital for three months immediately after giving birth explaining how she never knew what the problem was. She informed journalists that after she saw her son’s condition deteriorating she took him to different hospitals and was told that he has only three months to live if he doesn’t undergo surgery.

She mentioned how they were able to locate the Sick Pikin Project where she said they were warmly received adding how they paid for everything and even given money for phone bills as well as pocket money before departing Sierra Leone.

Hawa Sesay, a teenager who is also one of the beneficiaries, explained how she was going to school one day and had an accident. According to her, her waist bone was broken, and she bled for two days at the hospital.

She maintained that after she was examined at the Kenema Government Hospital they were told that the hospital couldn’t handle her case, and was referred to Freetown. She mentioned how she got her waist bone healed at the Emergency Hospital.

She informed the media that she was later referred to another hospital because she couldn’t urinate by herself. She furthered that they couldn’t handle her case and was told to undergo a surgery in India.

The young girl expressed her sincere thanks to the Sick Pikin Project and their donor partners for saving her life and her future revealing that she is now perfectly well.

Ishmael Charles commended the Government for its unflinching suggesting that an ultra modern hospital should be built and well-equipped to be dealing with such medical conditions.