2nd Lieutenant Gabriel Dumbuya is on record for being the first Sierra Leonean in a generation to march up the steps of Sandhurst’s Old College during a commissioning parade that was held recently. He was one of 243 Cadets, from 23 different nations, to complete the Academy’s world renowned leadership course and as part of the Sovereign’s Platoon – the best in the intake. 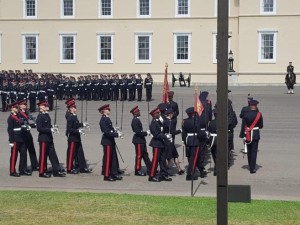 Interestingly, history was made because Gabriel’s late father, Col. K.M.S Dumbuya, also trained at Sandhurst, passing out from Salerno Company in 1971.

Witnessed by hundreds of relatives and dignitaries, Gabriel’s parade was watched by Sierra Leone’s Acting High Commissioner to the UK, RSLAF’s Deputy Chief of Defence Staff and Gabriel’s immediate family.

This brilliant and ambitious young man’s journey started two years ago when RSLAF, with the support of RMAS and ISAT (SL) selected Gabriel as the best of the many excellent Sierra Leonean soldiers who applied for this opportunity.

Gabriel is now poised to add the knowledge that he has acquired from one of the world’s topmost military institutions back home to the Sierra Leone Military Force and it is believed that such will greatly lead to meaningful mapping out of strategies by the hierarchy of the force.

He is an inspiration to many young committed military officers who are desirous to rise to higher heights within the military force and it is definite that he will personally motivate them to reach the top.

When this medium caught up with Gabriel, this was what he said: “I am very elated to make such an achievement. Definitely it will help dispel the myth that this country has people who are only interested in locking up in internecine conflicts within the backdrop of our bloody 11 year war. Indeed, Sierra Leone has intelligent people who can make their mark not only nationally but internationally.” He added that we must always set targets and work assiduously in order to crystalize them into realities.

“I would like to extend my profound thanks and appreciation to all those who supported me in one way or the other to go through. Again, I appreciate all the commendations from near and far. May God bless you all,” he expressed appreciation.