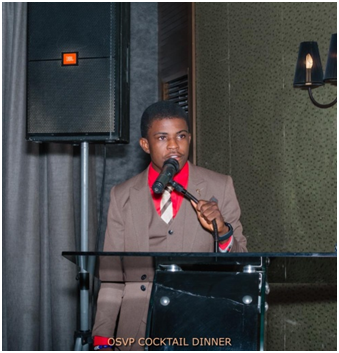 The winner of the International Orange Venture Prize (OSVP) 2022, Joseph Koroma, was recognized and honored at a cocktail party on Thursday 17th November 2022 hosted at the prestigious Lagoonda Complex in the West End of Freetown.

The event brought together representatives from the Government, Staff and Management of Orange Sierra Leone, family members and well-wishers of the Winner, private sector company officials, the media, etc.

Orange-SL Chief Executive Officer, Sekou Amadou Bah, expressed nice sentiments about the winner, noting that in three years, his company has awarded seven winners under the general and women’s categories in the sum of 365 million Leones.

“Every year, all the finalists from the different countries will participate for the international grand prize organized by OMEA. This year, out of 17 countries with over 1,400 applications, Joseph Koroma, one of the Sierra Leonean finalists emerged as the winner for his innovative project known as “Life Blood- Sierra Leone” and he will receive the sum of 25,000 Euros for this grand win. As a company, we are very excited about this win as it is a win for Sierra Leone,” he remarked and continued that the company hopes to train, nurture, finance, and provide the platform for many more innovators and entrepreneurs to thrive so that the company can produce many other Joseph’s that this country will be proud of.

“Thank you for gracing this occasion in honor of Joseph and cheers to Sierra Leone for this great win,” Bah said.

The winner, Joseph Koroma, registered his appreciation to Orange -SL for supporting his project, adding that “I owe everything to Orange-SL”.

“The company gave me a spring without idea and skills,” he said and continued by thanking those who supported him throughout the process, such as Innovation SL, one of his mentors – Mahmoud Idriss, for providing the guide; Osman Kargbo, who gave him the logic needed to perform well under his project; and his Partner Osman Sahid Sesay, for helping him so much and being a good partner.

“Lifeblood is everybody’s own. We have saved lots of lives through blood transfusion. Sierra Leone has the highest cause of maternal mortality caused mostly by bleeding. Fifteen percent of blood transfusion can help so much in saving lives,” Koroma revealed and furthered that they are pushing for about 85 percent of Sierra Leoneans to know their blood groups and want to create more blood banks to save lives.

“We created a Community App to save the gap of getting more blood in the blood banks. We need more blood banks,” he said and noted that they have created systems to take records and operate blood systems in laboratories with good practices. “The standard has been set and our system can compete with other countries,” he said.

The Winner requested more support and partnerships to enable them to increase blood availability, and blood data, create blood education, push towards SGG 3, 4, and 10, and try to do 17.

The Director General of the National Telecommunications Commission (NATCOM), Daniel Kaitibi, informed the gathering that he was present when Joseph was crowned as a winner. “I was very proud and excited for my country to win such an enviable prize, especially when we were competing with other 16 countries,” he said. He continued by pledging his institution’s support to the Winner, Joseph Koroma, and admonished other Innovators to showcase their talents for the benefit of the nation.

The Deputy Minister of Information, Solomon Jamiru, thanked Orange-SL for creating jobs, expanding its network and contributing to national development. He continued to thank the company for exposing young people to represent the country through innovations. “I want to take this opportunity on behalf of the President and Government to congratulate Orange Sierra Leone for emerging as the winner,” Jamiru said and added that despite the economic constraints in the country,  Orange-SL has not stopped investing in the country, especially on human capital development.  “Once more I want to thank Orange SL and Joseph Koroma for bringing laurels to Sierra Leone for which we are grateful as a Government,” he noted.

OSVP’s Le100 million local star prize Winner 2021, Haja Isatu Bah, said in spite of the economic challenges in the country and across the world, she is happy that Orange-SL has not relented in supporting local entrepreneurs. “I am looking forward to always being part of the Orange family. They have opened doors and opportunities for us,” she said and went further to recommend that the company should be considering an increase in prizes so that the Young Entrepreneurs can boost their businesses. Bah called on her colleagues to support the company. “Everybody must work to match the prize,” she said.

Minister of Basic and Senior Secondary Education, Dr. David Sengeh, who also doubles as the Chief Innovator, said the country has chosen what entrepreneurship has helped to do, noting that lots of Sierra Leoneans have won innovative awards. “This is part of the human capital Development.  We are having a leadership that is willing to promote Sierra Leoneans taking innovation to another level,” he said. “More students have applied for science than arts and more women have applied for innovations. We the young people have to be entrepreneurs and good leaders,” Dr. Sengeh said and ended by thanking Orange-SL for the support.

It could be recalled that the OSVP was introduced by Orange Middle East and Africa in 2011 with a strong ambition to accelerate start-ups and promote local innovations with great potential to solve social and digital challenges in Africa.

In March 2019, Orange Sierra Leone launched the OSVP national competition to give Sierra Leonean innovators and aspiring entrepreneurs the opportunity to acquire funding, mentorship, and expansion of their businesses. 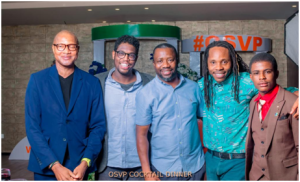