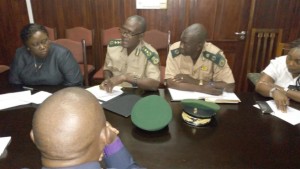 The Chief Justice of the Republic of Sierra Leone, Justice Desmond Babatunde Edwards has revealed plans to launch the Judicial Week from the 17 – 20 September 2019 in collaboration with Legal Aid Board (LAB).

During this period, those who have been in correctional centers for a long period – sometimes for years – will have their cases heard by Judges identified for purposes of the Judicial Week. This will include inmates who have indictments but not on trial, those without indictments and those cases of long adjournment. The Chief Justice explained that a key reason for the week is to clean up correctional centers across the country.

The Honorable Chief Justice made this disclosure at a meeting with the leadership of the Sierra Leone Legal Aid Board and the Sierra Leone Correctional Service in the conference room in his Chamber on 23 July 2019.

He said that the Correctional Service will have to compile, in good time, the list of inmates whose cases will be heard. He added that this should be done by the next meeting on 5 August 2019.

He said he hopes to have the Judicial Week every year.  He explained that the idea is to ensure those who have been in correctional centers for long time, but have no case to answer, do not continue to suffer.

The Executive Director of the Legal Aid Board, Ms. Fatmata Claire Carlton-Hanciles welcomed the initiative by the Chief Justice and assured him that the Board will provide legal representation to all inmates who will be brought before the Courts. The described the inmates concerned as clients of the Board whose plights have been brought to the attention of the Chief Justice and the Office of the Director of Public Prosecution in the past. She drew attention to a nationwide assessment of correctional centers carried out by the Board which found out that there are 196 inmates without indictments for the period 2016 to date.

The Chief Justice pointed out that the Prison Courts will continue to sit notwithstanding the Judicial Week. In her response, Ms. Carlton-Hanciles expressed concern about these courts which sit within the confines of the correctional centers because they are not considered to be a proper court. ‘These cases should be heard once and for all in an open court so as to not only serve the ends of justice but to also save time and money on the part of the state,’ she said.

He also seized the opportunity to discuss steps being taken to address the issue of jurors which is causing serious delays in the trial of capital offences. He revealed that he will be writing to the Chief Immigration Officer and the head of the Human Resource Management Office (HRMO) on this matter.  He noted that there will be a proper juror service by next year. He added that there is a large pool of employees in the public service who can serve as jurors. Another issue that will be addressed is allowance for jurors.