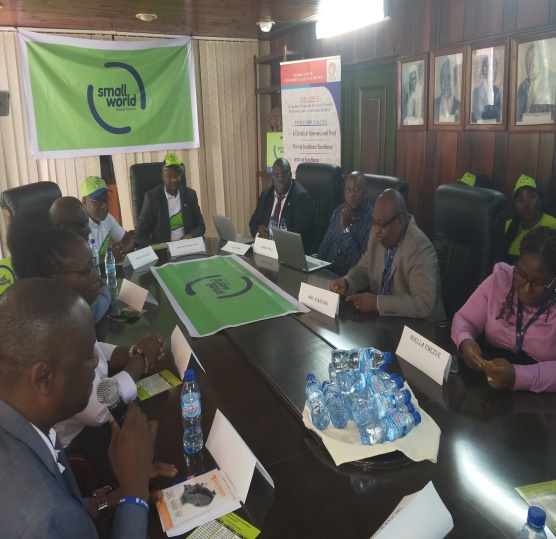 One of the country’s strong banking competitors, the Sierra Leone Commercial Bank, is seriously busy making a landmark in the industry as the Bank has just launched another product quite recently. This is to enhance customer satisfaction and improving financial service delivery in Sierra Leone.

He outlined the new product’s key objectives to include the following:

In addition, he said the Money Transfer product will enhance customers’ satisfaction allowing money transfers directly at bank accounts at the Sierra Leone Commercial Bank and other banks.

The new product adds value to the cash payment services the Bank is delivering. The MD further disclosed that the money transfer is instant and competitively priced; adding that the receiver can pick up money at any of their locations across the country within minute after the transaction is completed by the sender.

At the climax of his speech, he officially launched the Small World Money Transfer Service on behalf of the bank which he officially presented to its customers and the general populace.

With the launching of this service, communities will be connected and it will enhance access to get funds to Sierra Leone faster and at a much lower cost. According to Yves Doho, with the SLCB Small World service a person can send money directly into a bank account to any country among the 190 countries they are operating.  “Any customer can use this platform for someone overseas to send money directly into your bank account with SLCB,” he stated.

The head of Money Transfer Operations, at the SLCB, Amadu Sanu-Sesay said the Small World Money Transfer product will make it easier for business people to pay for goods and services into their business partners’ accounts overseas without travelling with bulk cash.

He added that Sierra Leone domestically struggles to move money from people’s bank accounts to offshore bank accounts using the two traditional forms of money transfer; that is Western Union and MoneyGram. He assured that with SLCB, the Small World products give possibility with competitive tariffs for the service.

With this new product, it was guaranteed that tariffs will exceed what the normal money transfer offers to the people. “Using the SLCB Small World service, you can send money directly into a bank account to any country among the 190 countries they are operating. Any of our customers can use this platform for someone overseas to send money directly into your bank account with SLCB,” he said.

“The SLCB Small World will offer bank deposits and cash picks for a start as this new product has additional features like mobile wallet and bills payment, adding that SLCB customers can also use the product to pay their children’s fees directly to their schools or colleges’ bank accounts overseas”.

He reiterated that this new product will make it possible to utilize the customers’ Leone account to remit money to an overseas account with foreign currencies, using the designated rate set by the Central Bank for conversion of stipulated foreign exchanges. “These efforts indicate SLCB’s leading financial service posture in the commercial banking sector as it puts smiles on the faces of customers,” he ended.