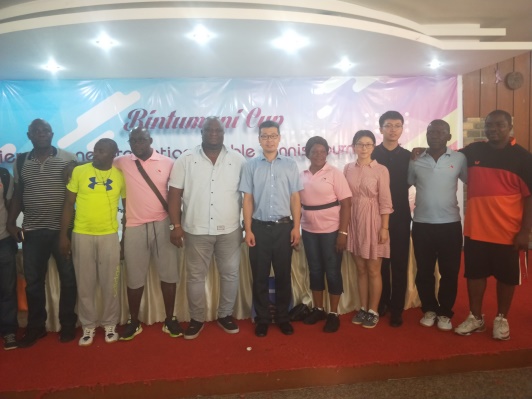 After two days participation at the International Table Tennis Tournament supported by the Embassy of the People’s Republic of China at the Bintumani Hotel in Aberdeen, Freetown the Sierra Leone Table Tennis Association has received support from the Chinese embassy.

During the opening ceremony, Deputy Head of Mission of the Embassy of the People’s Republic of China Wang Xinmin, disclosed that Table Tennis has been one of the most popular sports in China and that is why they were promoting and circulating its knowledge and skills in Sierra Leone. He noted that China has recorded the best players in the world and they have flourished all over the country and outside world in the championships worldwide.

He recognized the fact that young people are gifted and passionate about playing Table Tennis which he underscored that in the years to come he foresees the country would record the best players not only in Africa but the world as a whole.

Mr. Xinmin added that this is not the first time the Chinese Embassy has supported such initiatives in Sierra Leone, rather the Embassy has also aided the country in every field of sports and athletics ranging from equipment, sponsoring seminars and training courses which is part of their polices and they are proud to say they have been getting remarkable results which truly benefited each and every Sierra Leonean.

He stressed that China and Sierra Leone share good relationships and have very close cooperation in all matters over many years since 1971  supporting each other in sporting activities, bilateral relations etc. Therefore, he pledged that they will continue to promote and strengthen the bilateral cooperation in the area of sport.

He acknowledged China’s support to Sierra Leone in diverse ways almost in every sector in the country. The idea of the tournament, he stated, was initiated by the Chinese Government through their Embassy in Sierra Leone two years ago and they  want it to become a traditional event every year that will bring the Sierra Leone Table Tennis Association and other competing sides locally or internationally to spar and motivate the desired effect of sportsmanship in young people.

Besides Table Tennis, Mr. Frazer also appealed to the Ambassador to consider other opportunities for the youth of the country such as scholarships and training programmes which could help them push forward towards achieving growth levels in sports.

Coach Alosak of the Table Tennis Club Edward Saio whose team won this year’s tournament applauded the Chinese Embassy for organizing such an event which he said has created a lot of impact on the lives of young Sierra Leoneans who have made up their mind to choose table Tennis as a career.

He disclosed that it is no secret that his team won this year’s tournament as he was effectively training his players and they showcased it at the competition. In future, Mr. Saio assured that his players will continue to train hard, will be well prepared for international competitions to represent Sierra Leone.

Meanwhile, he called on the Government of Sierra Leone to support the Sierra Leone Table Tennis Association as they are really challenged as an Association. Alosak Table Tennis Club Player, Beresford Sawyer, who won the competition three in a row this year expressed appreciation to his team for the support, especially coach Edward Saio who has been very supportive to him in achieving his career in Table Tennis.

He applauded the Chinese Embassy too for organizing the Sierra Leone International Table Tennis tournament and said it has impacted not only his life but his colleagues as well. He encouraged his colleagues to believe in themselves and take the table tennis sport seriously. The event was climaxed by certification and awarding of prizes to deserving winners of the tournament. 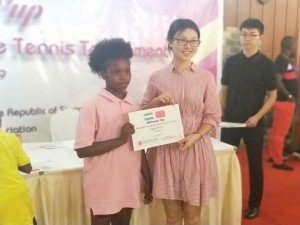 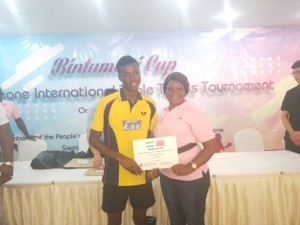 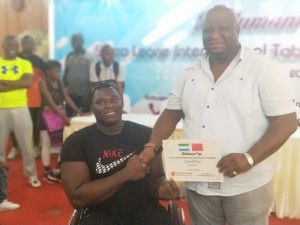 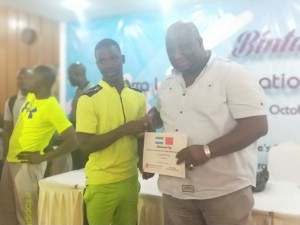 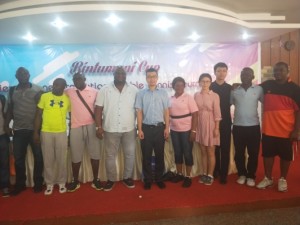