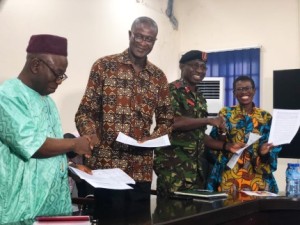 Mitigation Plan. The signing of MoU between FCC, SLRA, RSLAF & ONS happened under the supervision of the Minister of Finance.

The funding will enable FCC, in collaboration with RSLAF and ONS, to clear and desilt gutters, drainages, bridges and culverts in 62 flood prone locations over the next three months. The implementation will start on Sunday 28th July, 2019 with supervision from SLRA, who will also map out locations that would need long term engineering works.

FCC in a press release says it is grateful for the financial support, which will be provided by the Road Maintenance Fund Administration (RMFA), to build on gains that were made when 52 locations were covered in phase 1.

The Flood Mitigation activities are complemented by community engagement to increase awareness of flooding risks and FCC’s ongoing drive to plant over 20,000 trees this year, particularly in upper catchment areas.

FCC went on to state that it recognizes that addressing the issue of flooding in Freetown goes way beyond clearing waterways in the city. We will cooperate with the relevant stakeholders to tackle the underlying issues that cause flooding, including undertaking engineering works where needed and fighting against deforestation.