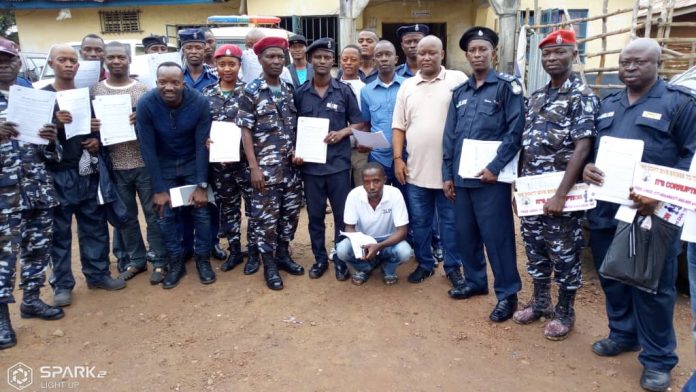 “We are not stopping at declaring our assets, incomes, and liabilities. We are taking further steps to reengineer ourselves, to re-commit ourselves to serving the people of Mattru Jong with fairness and honesty in our operations, to install integrity at traffic, to re-command respect in the eyes of the public, and to pledge our commitment to supporting and strengthening the fight against corruption,” ASP Umaru Turay in charge of operations said in a Parade Talk hosting the Anti-Corruption Commission.

His statement comes barely twelve days following release of the Global Corruption Barometer report 2019, which increased dramatically the percentage of people believing that there is less corruption in the SLP as compared to 2015.

“It is not by a mistake the figures have increased, nor is it by a puerile work, and nor is it through some slapdash programme,” ACC Southern Regional Manager told officers at the Parade Talk. Musa Jawara said the Pay No Bribe campaign continues to pay off, and tackling bribery in the SLP is seriously a huge task, but it is surmountable.

He said the monthly technical working group meetings held across the country – where MDAs review each other’s anti-corruption efforts; the sporadic sting operations – where at checkpoints in Freetown, Moyamba and Rutile half a dozen officers were arrested, and at Tikonko checkpoint in Bo and elsewhere several officers were nabbed; the parade addresses – where the petite distance between officers and ‘Pademba Road’ or their dismissal is emphasized; and partnership meetings – where CDIID and ACC strengthen collaboration to tackle graft, have been huge success to producing a desirous perception held by the public of their police force.

The ACC believes asset declaration can as well add to the effort at apprehending corruption and bribery in the force. Senior Public Education Officer, Sulaiman Sowa said when officers at Mattru Jong declare it continues to inform residents there that they are being policed by accountable personnel.

He said asset declaration offers protection against finger-pointing in respect of ownership of assets (vehicles and houses) and incomes. Some officers live a spectacular life style, and may be accused of creaming in an unexplained wealth.

Sowa said only asset declaration can save one’s neck. The forms may prove that the wealth is acquired lawfully.

According to the Anti-Corruption Act 2008, Section 119 (1) mandates public officers, within three months of becoming a public officer, to deposit a sworn declaration of their incomes, assets, and liabilities with the Commission and should also make such declaration yearly. Officers should also declare when they leave office.

However, the ACC proposed amendment bill laid before Parliament exempts public officers below grade seven from declaring. It means more than half of the police force by law will not declare, except officers by the nature of their routine administer finances. Therefore, the ACC is calling on the public to encourage their Members of Parliament to support the Bill in order to make the Commission stronger in the fight against corruption.

The ACC, which was on a three-day tour to Bonthe District, held a similar parade talk with the Sierra Leone Correctional Center (SLCC). The Commission admonished correctional officers – who can be exposed to temptation to indulge in malpractices such as transporting of unwanted materials or articles to inmates, offering preferential treatment to some, allowing inmates access outside the facility at odd hours, and receiving and soliciting bribes from visitors – to guide against perpetrating malpractices.

The Commission said it will sustain the district tours by making them quarterly.