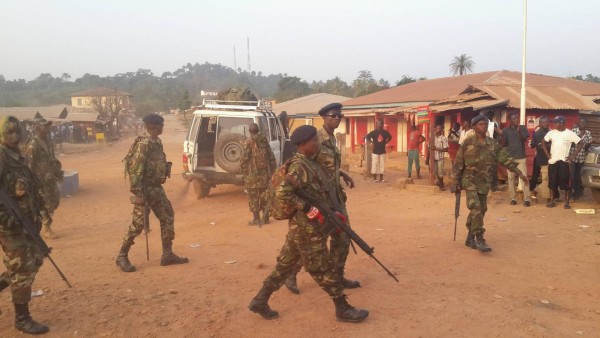 The National Security Coordinator, Brig (Rtd) Jah Tucker says the Military Aid to Civil Power (MAC-P) has been invoked to cover the residence of each of the three judges presiding over the three commissions of inquiry (COI) investigating corrupt former government officials.

Tucker, who heads the Office of National Security (ONS), told journalists that the strand of Mac-P invoked was the “standing” one and not the”emergency”one.

This means soldiers have now taken over the NASSIT Estate residence of the Nigerian, Ghanaian and Sierra Leonean judges who are investigating allegations of corruption under the administration of former president Ernest Bai Koroma.

It follows a burglary at the housing unit of Justice Biobele Georgewill in the early hours of Monday, with thieves carting away his laptop and an external hard drive.

There was another attack on the following day just a few buildings down the street on the home of a presidential adviser, Dr John Tambi, which shares fence with another judge at the Commission of Inquiry. Two laptops and files were also stolen.

Justice Georgewill himself has remained defiant. Resuming work yesterday for the first time since the attack on his residence, the Nigerian judge vowed to move on with vigor to conclude his assignment in the country.

“It is time to move on with greater vigor to take the work of the Commission to its legal logical conclusion, God being my helper,” he said in a statement issued to the press.

In the statement, he thanked Sierra Leoneans from the President to the Vice President and various heads of institutions “for the overwhelming show of concern”and assurances for his safety and security for the remaining days of his stay in the country.

Already investigations on the incident are ongoing, with the police having placed a Le10 Million reward for information leading to any successful prosecution of the culprit.

The COI was instituted in January this year as a result of the recommendations of the Governance Transition Team report in 2018.

Justice Geeorgewill who has been in the country since then, is dealing with some of the most sensitive cases in the commission; these include inquiries into the Ministry of Youths, Ebola funds, unsecured bank loans, Petroleum Directorate and many more.

Some of those cases can directly tie former President, Ernest Bai Koroma and most of his ministers to corrupt practices.

Last week the Nigerian judge opened an inquiry into the Ministry of Sports and Ministry of Trade and Industry. And next week he will be wrapping up inquiries into Ministry of Youth Affairs, Ministry of Health, Mines and Mineral Resources, Petroleum Directorate and Sierra Leone Commercial Bank.