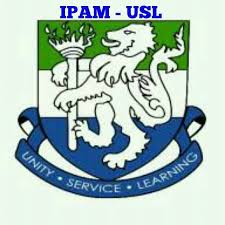 In a non-partisan debate and parliamentary ratification of the IPAM Bureh Town Campus Members of Sierra Leone Parliament on Tuesday 16th July, 2019 expressed their gratitude over the professionalism of the Investment Model IPAM presented to the House and have unanimously approved an agreement related to an “Amendment Contract Between FEMAB Sierra Leone Limited (“the developer”) and the Institute of Public Administration and Management (IPAM)” for the building of a new campus at Bureh Town in the Western Rural community.

The Deputy Minister of Finance appreciated Dr. Ezekiel Duramany-Lakkoh and the IPAM Administration, including the Deputy Vice Chancellor of IPAM Prof. Edmond Nonie and the Minister of Tertiary and Higher Education, Professor Aiah Kpakima for presenting a case to Parliament which was unanimously approved.

In a brief engagement with Dr. Ezekiel Duramany-Lakkoh who is currently acting as Dean of the Faculty of Management Sciences and Financial Management Consultant of the project, he noted that IPAM has developed a sound financial discipline that will enable the repayment of the $50 million project within eight years. Dr. Duramany-Lakkoh noted that the College’s financial projections are designed to address shocks like foreign exchange and interest rate issues.

Presenting the contract agreement, the Deputy Minister of Finance, Dr. Patricia Laverly said the agreement was related to the construction of new residential campus for IPAM. “This investment will provide accommodation for 400 students and 100 staff”, she informed the Honourable House.

To buttress the point made by the Deputy Minister of Finance, a student from IPAM, Kadiatu Sesay delivered a motivational speech in order for Parliament to see reason for the contract agreement to be approved. The eloquent student humbly told Parliament that the growing population of students in relation to a variety of modern courses, the need for the decentralization of the university, coupled with rental cost for lecture rooms, was advanced as arguable factors that should be considered by Parliament in light of approving the said contract agreement.

The Chairman of Tertiary Education Committee in Parliament, Hon. Alimamy O. Kamara of SLPP described education as a flagship project of President Bio’s Government, adding that “IPAM deserves the project”. He also lauded the Management of IPAM for being outstanding by coming up with innovative initiatives aimed at improving education in the country.

Members of Parliament who contributed immensely to the debate which resulted to a unanimous approval included Hon. Hassan Sesay of APC who said the project would bring development to Bureh Town; Hon. Rebecca Y. Kamara of C4C who urged for monitoring and evaluation of the project in order to have a standard structure with value for the money; Leader of C4C, Hon. Saa Emerson Lamina who heaped praises on IPAM for their initiative; Chairman of the Finance Committee, Hon. Francis A. Kaisamba; Paramount Chief Bai Kurr Kanagbaro Sanka III of Tonkolili District who informed the House that he was a key player in the transformation of IPAM when he served as Deputy Chairman of the University; Hon. Aaron A. Koroma of APC who encouraged other universities to emulate IPAM; Acting Leader of the Opposition, Hon. Alhaji I .B Kargbo who acknowledged the contributions made by IPAM to the nation; Acting Leader of Government Business, Hon. Mathew S. Nyuma who said his Government is giving preference to human capital development; among other important contributions.

Chinese Ambassador Takes IPAM Students Through What is Actually China