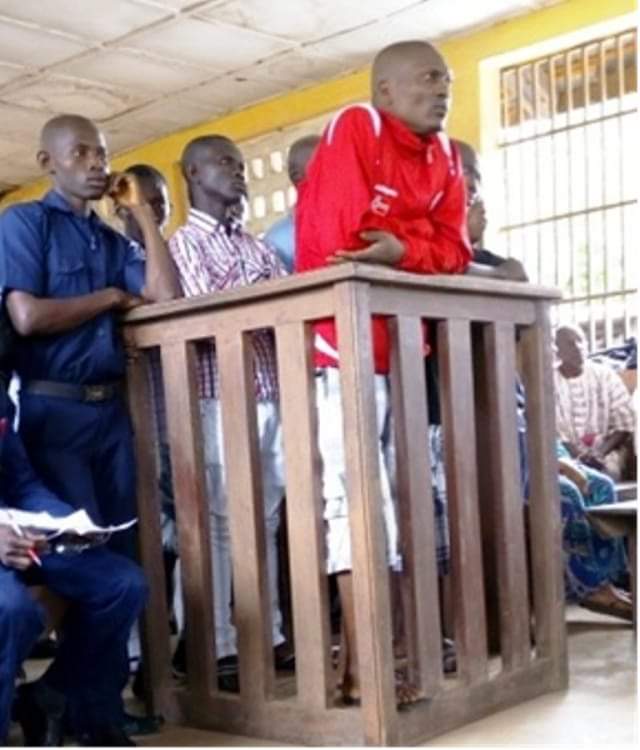 It was a very touching moment in and out of the courtroom for the bulk of those that were following the proceedings in the matter of the State versus Mohamed Kabba alias ‘Sisco’ and 7 others.

The majority of them burst into tears as they pleaded with the Judge to tamper justice with mercy.

Hon. Taylor himself said it is with a heavy heart that he pronounced the sentence on the 7 convicts for which the Jurors returned a verdict of guilty.

The convicts were part of 8 persons accused for the murder of one Haja Umu Jalloh – 47 year old woman who died after armed robbers ransacked her residence at Rotifunk in the Kaffu Bullom chiefdom.

They were subsequently arraigned before Hon. Justice S.O Taylor on a 3 count charge of Conspiracy, Murder and Unlawful Possession of Small Firearms with regards the death of Haja Umu Jalloh.

The third Count was specifically for the 1st. Accused – Mohamed Kabba aka ‘Sisco’ whose possession the Small Firearm was found.

These Accused Persons were being defended by Lawyers Mohamed Kori and Randy Bangura of the Legal Aid Board of Sierra Leone, while the matter was prosecuted by the State Counsel / North – Lawyer Aruna Jalloh. A total of 6 Prosecuting Witnesses testified including the Scene of Crime Officer and the Pathologist – Dr. Simeon Owizz Koroma. They said in their separate testimonies that, the 47 year old Woman did not die a natural death and that the finger prints obtained at the scene of crime do bear the features of all the Accused Persons in the dock. It was therefore unbelievable to hear the Foreman of the Jurors who said the verdict was unanimous that the 5th. Accused – Alimamy Kargbo alias ‘Catch Fire’ was not found guilty of any of the charges levied against him.

In a way of mitigation, the Defence pleaded with the Judge to tamper justice with mercy. Lawyer Mohamed Kori submitted that the Convicts are pretty young Sierra Leoneans who were determined to refrain from all forms of criminality and ready to transform to productive Nationals if given the chance. He said the prescribed penalty for such offences will lead to untold sufferings for the families of the Convicts adding that the aspect of Sentence is entirely in the hands of the Honourable Judge. But Hon. Justice S.O Taylor was not very much convinced and therefore unable to change his mind.

He said even though it is with a heavy heart that he would be making his pronouncement, yet the Law is the Law and could not do otherwise. He therefore sentenced the 1st. Convict – Mohamed Kabba alias ‘Sisco’ to 12 months on Count 3 – which is Unlawful Possession of Small Firearm. Hon. Justice Taylor went on to pass sentence to each of the 7 Convicts to 8 years imprisonment for the offence of Conspiracy. He further sentenced all of them to death by hanging as he prayed for their Souls to rest in Peace.

In another development, Justice Taylor also sentenced Nabie Sesay to 4 years imprisonment after he was found guilty for the offence of Sexual Penetration, adding that his time spent in detention would be taken into consideration.

This was as a result of the plea of mitigation by lawyer Randy Bangura. He based his submission on the appeal that the convict did not know the consequence of his action which he has now regretted.

Lawyer Bangura added that the convict is a young man that has promised to refrain from such offences and would become a useful Sierra Leonean if given another opportunity.

Three other accused persons – Mohalim Conteh alias ‘White Boy’, Mohamed Kamara alias ‘Koko – Di – Bongo’ and Ibrahim Bangura aka ‘Old Boy’, who were on a 3 count charge of Conspiracy, House Breaking and Larceny, have all been acquitted and discharged. They were accused of breaking and entering the dwelling residence of one Mohamed Kamara and stole therein properties valued at over 15 million Leones. The incident occurred at Lungi in the Kaffu Bullom Chiefdom on 2nd August 2017.