It’s about 7 years now since Edward Bangura started suffering from a broken hip, which led to an Osteomyelitis infection. The prolonged illness has rendered him in partial paralysis. This young and intelligent Sierra Leonean is a university student and a breadwinner for his family. This illness has continued to make life very difficult for him, as he can no longer walk or stand upright, fend for himself, or even help himself around for anything. He is now completely dependent on relatives and friends for his survival and daily activities.

He has been diagnosed in many hospitals across the country, but all suggest that he has to be flown to India for a hip replacement. He and his family members cannot raise the $16,000 needed for the surgery and other costs. Edward is still languishing at the Wesleyan Hospital in Kamakwie, Karene District, but still sounds intelligent with hope and faith, and he is responding to treatment to subside the pains. We can get Edward back to normal life, sound and energetic to contribute to national development, if only we can sacrifice the $16,000 needed for his overseas treatment.

A quick intervention could help save him and the burden on family and friends. He’s deteriorating day by day.

Below is his narration/message to the public few months back from his sick bed.

“My name is Edward Bangura.
“I’ve been suffering from a fractured hip which has led to Osteomyelitis for 21 months now.
It all started when I fell and landed awkwardly on my right hip while playing football way back in 2013. I was however taken to the Emergency Hospital where an x-ray was done on my hip and I was told that I’d suffered a minor fracture. Pain killers were prescribed for me and the pains subsided greatly along the way as I took them.
Life seemed OK after a month and I went back to normal life.

It was in 2017 that I fell sick again and an injection was given to me by a medic on the same right hip which left me paralysed for some days. I was rushed to a nearby hospital on that very minute though, and I regained my steps days after but couldn’t quite walk on my own nor stand on my right leg on a firm stance to date.
I’ve been taken to different hospitals for scans and x-ray to detect what had gone wrong with me. One of them is the Choithram Memorial Hospital situated at Hill Station, Freetown, where I was diagnosed to have suffered a fractured hip which has led to Osteomyelitis.

“I’ve been visiting Dr. Bundu’s clinic at the Connaught Hospital on a weekly basis since then as he’s one of the most renowned orthopaedics in Sierra Leone. After going through my scan and x-ray results, he told me I needed a hip replacement and that it cannot be done here in Sierra Leone because we don’t have the required equipment.

Since then I’ve been on Clindamycin and Naproxen on intervals.
I’m just too scared as my leg is getting thinner due to the infection.”
“Recently I went to the Shuman Hospital for check-up and the Indian orthopaedic told me the same thing that I needed a hip replacement and that I’ll have to travel to India for that stating he’ll have to first of all clean up the whole femur as the infection has taken over a large portion of it before the said hip replacement.
The whole process cost sixteen thousand dollars ($16,000).” – Edward Bangura

Such a pathetic and painful experience he is going through. Let’s help save a dying young Sierra Leonean. He needs us more than ever before. He’s scare about his thinning leg, we should be scare too. Please contact the following people for more information and to deliver your support: 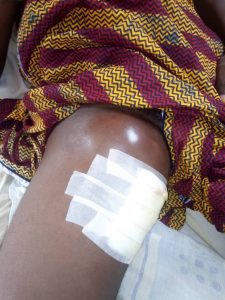