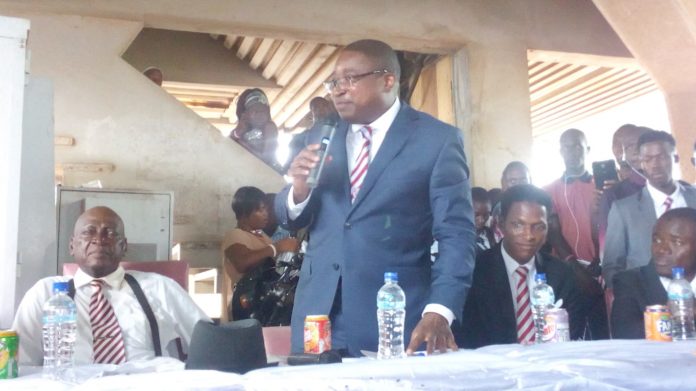 Deputy Governor of the Bank of Sierra Leone, who happens to be an Old Boy of the Albert Academy on Wednesday 12th June 2019, unveiled the Albert Academy Alumni Association Fourah Bay College Branch ultra-modern state of the art garden on the College campus.

Present at the ceremony were past and present pupils, including the current National President of the Alumni, Justice John King.

Speaking at the ceremony Dr. Ibrahim Stevens disclosed that he is proud to be an Academician and further revealed that they started the Albert Academy Alumni Association Fourah Bay College Branch in the 80s.

He encouraged students to be role models and serve as mentors.” You have great roles to play for the development of the school which is why it is significant to maintain good relationships with your fellow students,” he admonished.

‘’Focus on your work and let us continue to produce good people from the school. I think it is a generation thing. My generation has reached the middle level now and it will soon pass and you will be the next generation which is why you need to continue the strong  tradition of excellence the school has always maintained,’’ he  added.

He concluded by encouraging students to take their studies seriously and promised to always support the Association for its growth and sustainability.

Sahid Sesay Esq as Chairman of the occasion in his opening remarks disclosed that Albert Academy has gone a long way underscoring how it has implanted an enviable footprint in the annals of academia in the world and society as a whole.

He further disclosed that he is proud to be an academician disclosing that the first set of students who were admitted at the Law Department (Fourah Bay College) after its establishment were pupils of the Albert Academy.

He ended by encouraging students to focus on their studies saying regardless of his current status; he will never see himself taller than the Albert Academy and promised to always render his service to the Alumini.

Mohamed Wurie Bah, outgoing President of the Albert Academy Alumni Association, Fourah Bay College Branch in his statement said that he is grateful for all the support that had been given to him by the entire membership of the Alumni and said he believes that the current President of the Alumni will build upon the good foundation he has laid.

He said that the Ultra-Modern State of the Art Garden is worth over 70 million Leones.

He encouraged students to ensure that they maintain the garden and regularly attend national chapter meetings.

The event was climaxed by a band march and singing of the school song.