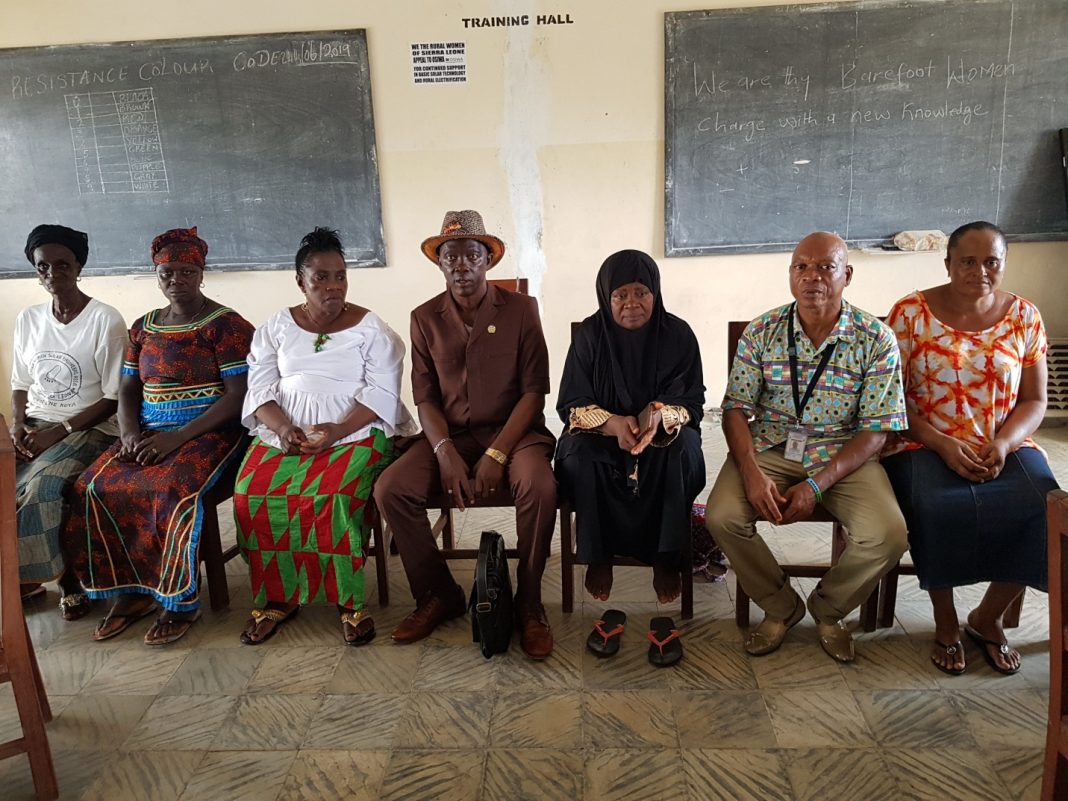 This was made known when journalists facilitated by Hon. Alex Mattia Rogers visited the institute to get first-hand information about the institute and their challenges on Monday 24th June 2019.

As part of their constraints, Haja Kanu disclosed that for the past 16 months they have gone without stipend. This she added, they want to government to look into as they are ready to give quality training. She also spoke about lack of vehicle among others. She thanked the Education and Energy ministries for their supports.

She spoke about their huge manpower that is ready to give light in the country if the resources are provided.

According to Haja Kanu people want to discourage them but she said they are not going to relent because they want to empower rural communities.

“If I am uneducated and I am doing such a good thing, what if I were educated. We want the President to give us the support; the MPs are seeing the reality of what we are capable of doing.”

Barefoot Women Solar Engineers Association Secretary General Edward Musa Anaque said among other things that the organisation is a grassroots one that belongs to rural illiterate’s women.

He said Haja Nancy Kanu was among the first batch of women to train in in India in 2007 and from 2007 to 2009 they have trained 260 women and now they have a batch of 50 which is funded by the central government of Sierra Leone that are drawn from South, East, North and North West regions of the country.

He said their training mainly focuses on practical which is called the ‘barefoot’ approached.

He continued to say they need a competent base educational curriculum for rural electrification as the government has picked up the mandate indicating that they are ready.

He commended the selection process of training across the regions and said they have brought members of parliament and the chiefs on-board.

Barefoot Women Solar Engineers Association started full operation in 2009 but was commission in 2012, now the team wants to decentralize as they need to train more people to take care of other areas.

The current structure the institute coast the past government about three billion Leones and it has a capacity of 50 students that will be train for four months.

Hon. Alex Mattia Rogers of Constituency 102 Pujehun District said Sierra Leone is moving towards rural electrification and he deems it feet to visit Barefoot Women Solar Engineers Association to know the level of progress they have made.

He said he is very impressed with them because he is not a stranger in that institute as he has seen what they are capable of doing and their move to empower women.

Hon. Rogers disclosed that he has sent third set of women in that institute from his constituency.

He said one among the first batch he sent went to India and now she is doing extremely well in her village in Pujehun District.

Hon. Rogers’ prayer is for the new intakes, which is funded by the government, do their best. He promised to engage other MPs and continue to talk with the government for their support as the new direction cardinal policy is to bring energy which he said is now extended to the rural communities.

One of the beneficiaries, Pakanda from Moyamba District said when they came to the institute they knew nothing but said they have learnt a lot such as colour post, tools, hydro meters among others.

She said she never knew women can learn engineering. She thanked the government and the founder of the project for taking up the bold step to empower herself and now others.