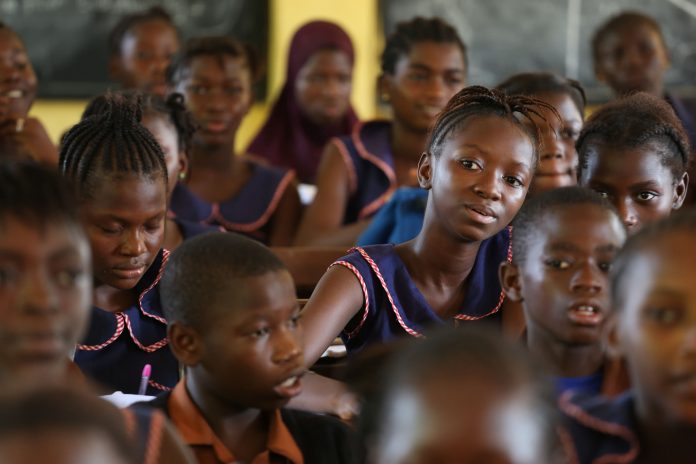 The dream of every parent the world over is to provide quality education for their children, so that by the time these children grow into adulthood, they will be able to live a decent life.  This dream is almost achievable in Europe, America and other developed countries, but in developing countries such as Sierra Leone, this seemed to be far-fetched.

This is all the more reason why quality education stands fourth among the seventeen Sustainable Development Goals set by the United Nations General Assembly in 2015 for the year 2030. This goal calls for ensuring inclusive and equitable quality education and promoting lifelong learning opportunities for all. In Sierra Leone, a good number of children do not go to school. Not because they are sick or they do not want to go to school. In fact they do. Research shows that some of the issues that raise their ugly heads in preventing the children from going to school include but not limited to poverty, sanitation, child labour, early marriage, health issues and in some cases there are no schools to attend, and where there are, there are few teachers.

Little wonder that when the Sierra Leonean President Julius Maada Bio was elected into office, he made free quality education his flagship program. In launching the free quality pre-primary, primary and secondary school education for government and government assisted schools, President Bio pointed out that education was an investment for personal and national development and without education a nation cannot get the much-needed manpower for socio-economic advancement.  While pledging his government’s commitment, he used the opportunity to call on parents and teachers to support the free education program. “My government will take legal action against parents who fail to send their children to school,” President Bio warned.

At this initial stage, the venture of the president and his government is being rocked by a myriad of challenges, paramount among which is the willingness or rather unwillingness of parents to send their children to school. In a country such as Sierra Leone where poverty is rife, most parents depend on their children to assist them in fending for the rest of the family. Farmlands have to be attended to, monies have to be earned to buy basics and in some cases, the girl child has to help the mother look after younger siblings and/or help with domestic duties from time to time.  Mostly in large cities children are seen leading poor blind or crippled parents along the streets assisting them in their begging trade. Another factor that is creating a stumbling block for the children is that disabled children are not being properly cared for. In a country where disability is mostly viewed as a result of witchcraft or a curse, disabled children find it hard to access education. James Fallah-Williams is the Program Director for Practical Tools initiative. He says the free quality education program initially never even incorporate disabled children as part of the general group that needed additional practical support in mobility and access. “It didn’t even consider making sure that school structures are made appropriate and reachable for the disabled,” he noted. He added that the success of the free quality education program will be judged by the unequivocal inclusion of destitute and abused children.

In addressing some of these challenges, President Bio encouraged both local and international partners to step forward and partner with government in ensuring the success of the free quality education.

Parents as well as the pupils themselves for which the free quality education is being provided have expressed optimism about the positive impact the free education will have on the socio-economic advancement of the country. The principal for the Government Secondary Technical School, Henry Kamara was very upbeat when asked whether he cared about the free education. He started off by commending the government and called the venture a good idea. He however asked for an upgrade of the physical facilities; school structures, furniture, libraries etc. “Government should also look into the affairs of teachers who are the driving force behind the free education,” he said.

On his part, Davidson Momoh, a JSS3 pupil of the Prince of Wales School, said the only issue they had with the free education was that they had to return the textbooks provided or pay a loss fine if they do not do so. “We are now afraid to even use the books, so we keep them without using them in order to return them when the time comes,” he said. He however said that the exercise was a good one as they would no longer be sent out of school because their fees had not been paid by their parents.

Joseph Sannoh the Chief Executive Officer for Heal Salone, a civil society activist and the publisher and proprietor of Education Microscope Newspaper on his part called on government to monitor the activities of the free education books and ensure the books are fairly distributed.

For the fourth pillar of the SDGs to be achievable in Sierra Leone, everyone must come on board; the government, the local authorities, parents, teachers, students, international community and the like. Free education for all must be everyone’s responsibility. Who cares about Bio’s free quality education? I care. You care. We all care.

This work is an SLRU mentorship project with support from Media Reform Coordinating Group (MRCG) and funded by the UNDP. It was researched and written by Mentee Adama Barrie and Donald Theo-Harding provided the mentorship.