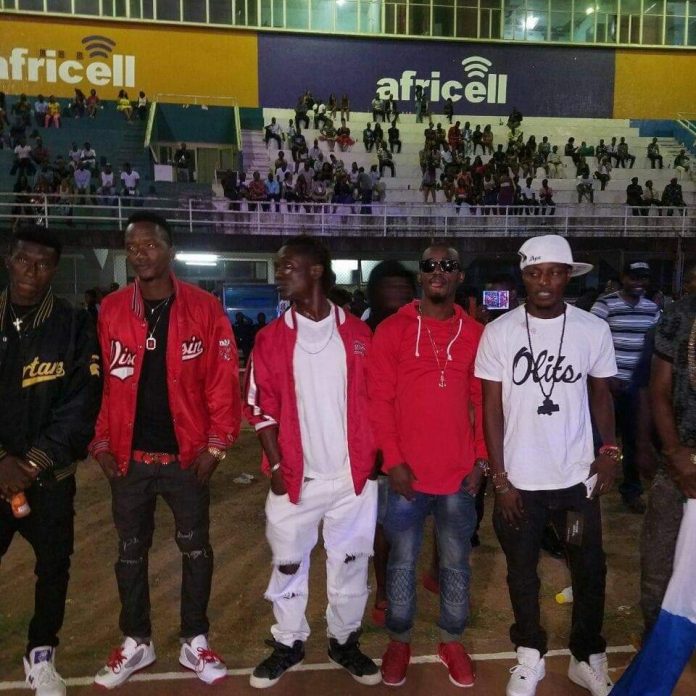 The Red Flag Movement [RFM] is one the most popular music labels in Sierra Leone and also among one with the biggest Fan Base in the country. The group is headed by its CEO, Alhaji Amadou Bankaria Bah aka LAJ who is one of Sierra Leone’s finest hip hop rappers.

From a confirmed source, a group calling itself the ‘Five Billion Strong’ quitted the Red Flag Movement on the 6th July 2019. The Movement used to have young talented hip-hop artists like Vuga C, Camouflage, K. Mill, under the Five Billon Strong chapter.

Talking to this medium most of the above mentioned artists claimed that the main reason for opting out borders on monetary issues. Vuga, who is now representing the Tee Zee music, owned by a Sierra Leonean living in the diaspora, in his new song titled “Fire for Fire”  explained that among other reasons that led to his leaving is that LAJ always fail to show interest about the welfare of others.

He gave an example of “Coke n Gin”, his colleague who is presently remanded at the Pademba Road Prison, whom he claimed CEO LAJ has not made any move to secure his release furthering how there had been many projects and staged shows from which they as label artists have not benefitted .

Yusufu Bangura and Alpha Wury Bah of the Five Billion Strong disclosed that for quite some time they exercised patience with the CEO maintaining that even though it is understandable that some shows that were staged were personally supported by LAJ but in as much as they were with him in promoting those shows and performed all over the country they deserve something no matter how small.

They bemoaned realizing that the CEO was very selfish during and after the release of their ‘Loyalty Album’ at Hotel 5/10, on the 1st of May 2019.  The disenchanted duo claimed that they had no representatives at the entrance and that the gate takings were never presented to them after the show.

Many fans in the East End of Freetown, where RFM has the highest number of fans in the country, have raised concerns as Vuga C, K Kill and others who were in the 5 Billion Strong are considered to be their brothers. Some have even threatened to withdraw their support for the Label.

CEO of Border Line (BL), Abdul Rahman Kamara, also known as Camouflage intimated that he has nothing to say about his withdrawal saying everything is now behind his back and he is presently moving on with his new label, BL,.  He has signed to a set of artists, a group called Famile and a lady called Precious of Housemates Salone fame.

This medium tried to get the side of the CEO LAJ to respond to these allegations but he was very busy to give us the full story but we are very optimistic to get his full response by next week.