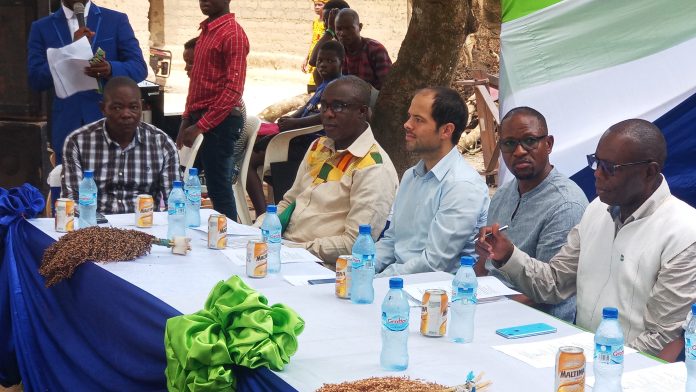 Managing Director of Sierra Leone Brewery Limited (SLBL), Daaf van Tilburg informed his audience during the launch of the Jamjay Agricultural Farm situated at Malampoh village, Tonkolili District on 18th May, 2019, that the Brewery believes that agriculture is a powerful driver of the economy. He added that it is indeed a potential driver of jobs and prosperity. “ I am of course particularly delighted when a top farmer in the sorghum cultivation excellence goes this far to extend into large scale agricultural pursuit in the country and the man himself Denis Jusu is leading by example,” he noted.

He went further to state that the Sierra Leone Brewery Limited (SLBL) has been in operations in Sierra Leone for over 57 years and has stayed in the country through the difficult times of the ten years civil war 1991-2001 and the Ebola Virus Disease in 2014-2016.

According to Daaf van Tilburg, the company is a large investor in the country and has strategically positioned itself as a good corporate citizen and has invested significant efforts and funds to setup the new commercial sorghum value chain to contribute to development and job creation in the agricultural sector.

He went on to say that since 2005, Sierra Leone Brewery Limited has been a major contributor to the agricultural sector through its local sourcing project for sorghum which is a clear demonstration of its commitment to the development of Sierra Leone’s poverty alleviation and improvement in rural livelihoods.

Specifically important for sorghum development, the MD said the SLBL has installed a Mash Filter Equipment (project costing over Le. 52.6 billion) which allows utilization of more sorghum in its production processes.

He added that the company invested 278 billion Leones in the last few years; in addition to launching a beer made of 100% Sierra Leonean sorghum in December 2016.

As a result, he highlighted that our needs for more sorghum have grown enormously and more farmers are benefitting. For example our sorghum volume has been more than doubled this year and we expect the same to happen next year. This is indeed a great opportunity for  farmers.

Daaf van Tilburg added that the Sorghum Farmers Association estimates that over 25,000 farmers and their family members benefit from this initiative with SLBL, adding that the impact of this will further be extended with the growth of its business.

“Today is indeed a bright example how vertically integrated local manufacturing can have large benefits to many other businesses and impact many lives of Sierra Leoneans,” the SLBL MD said, adding that it shows that local manufacturing companies and large investment not only positively impact with increased revenues to the Government; the creation of many jobs; execution of important social responsibility programmes but can even game-change and develop an entirely new robust value chain from which tens of thousands of Sierra Leoneans could benefit.

He encouraged the Government to support local manufacturers in their endeavours to thrive and have a multiplier effect on the socio- economic development of Sierra Leone.

The SLBL MD further informed his audience that: “There is a world of opportunity out there for Sierra Leonean farmers and food processors. We have the resources – our productive farmland and our fresh, clean water. We have the know-how, right across Sierra Leone — and right here in this farm. That’s a winning combination to keep Sierra Leone’s agriculture out in front.”

He used the opportunity to thank the CEO of JamJay, Dennis Jusu for the achievement and great partnership with Brewery.

Present at the event were Ministers, Deputy Ministers, Members of Parliament, Councillors, brewery Staff, Wellington residents, the Fourth Estate and a galaxy of people drawn from all walks of life.