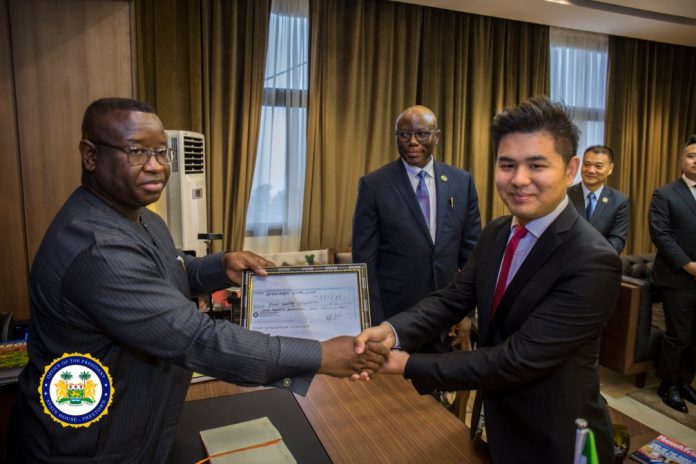 A delegation from the China, Ansun Angel Group, led by its Chairman, Zhan Fan, has met with His Excellency President Julius Maada Bio to present a cheque of USD 100,000 as support to Government’s free quality education programme.

In a meeting held at the State Lodge, Hill Station in Freetown, Sierra Leone Ambassador to the People’s Republic of China, Ernest Baimba Ndomahina, said the donation was to show how pleased they were that Government had prioritized human capital development.

He recalled that the donation was also in continuation to earlier donations already made to the Office of the First Lady in its “Hands of our Girls Campaign” and also financial and material support to a disabled football team in Freetown. He said the Group believes in the transformative vision of President Bio and was pleased to continue to support the New Direction Government.

Chairman of the Ansun Group, Zhan Fan, said that they were grateful to the President for welcoming them and for providing the environment to contribute to the free quality education programme. He noted that investing in education is the right step to boost development in the country.

Receiving the donation, President Bio thanked the Group for their continued support to the country. He said despite the huge cost involved, his Government had placed premium on education because of its importance to the development of the country.

He disclosed that the money would be handed over to a special basket fund that was created to support the free quality education and assured that it would be used for the intended purpose.