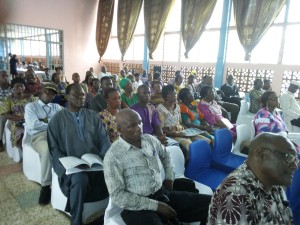 Aureol Insurance Company (AIC) on Friday 19th July 2019 held its 32nd Annual General Meeting (AGM) at the Atlantic Hall of the National Stadium, Brookfields in Freetown at which event the chairperson of the Board of Directors, Mrs. Yasmin Fofanah revealed that the AGM is to receive and consider the Audited Financial Statements for the year ended 31st December 2018 and the reports of the Directors and Auditors thereon to declare a dividend, elect Directors and to fix their remuneration as well as appoint the Auditors and authorize the Directors to fix their remuneration.

“The insurance industry continues to be characterized by declining insurance rates and market shares, stiff bargaining powers of buyers and slow growth which are a reflection of the overall economy. Despite the economic challenges and the volatile business environment, Aureol Insurance Company continues to deliver a very strong performance. Claims paid amounts to Le8.25 billion in 2017 compared to Le9.23 billion in 2017,” Mrs. Yasmin Fofanah disclosed.

She also enlightened that the Sierra Leone economic growth slowed to 3.7% in 2018 compared to 3.8% in 2017 due largely to cessation of iron ore mining operations but that however, it is anticipated that there would be improvement in economic activity with the recommencement of iron ore production and export adding that increased foreign direct investments in the agriculture and tourism sectors and public investments in infrastructure in 2019.

According to Mrs. Yasmin Fofanah, inflationary pressures increased from 16.59% in June 2018 to 19.29% in October 2018 intimating that this was mainly due to increase in food prices, which was compounded by a depreciation of the Leone and an upward adjustment in the domestic pump price of fuel adding that inflation rate decreased to 18.14% by November 2018 due to stability in the exchange value of the Leone against major currencies and an improved domestic food supply during the harvest season and closed the year at 17.46%.

Mrs. Yasmin Fofanah further articulated that on the future outlook of the company, growth in wealth and improved income hold significant opportunity for the company although challenges remain including building efficient marketing network, educating customers about insurance and other financial products and developing affordable and relevant insurance policies.

She also underscored that in the medium to long term, Aureol Insurance Company would continue to play a vital role in Sierra Leone’s economy informing that homes and cars would remain central to the lives of a large and growing segment of the population reiterating that protecting these assets with insurance would continue to be essential for both businesses and individuals.

She assured that Aureol Insurance Company would underwrite profitability and consistently pay dividends regularly to its shareholders in addition to enhancing shareholder value affirming that indeed experience has shown that Aureol Insurance Company operations combines capacity, integrity and more importantly good judgment in a manner unique in the insurance business underlining that this blend of strengths is a huge asset for the company’s shareholders that would only become more valuable with time.

Shareholders unanimously voted for all the resolutions with no objections.

Earlier, the representative of BDO, the auditing firm, in his financial report stated that the financial statement of Aureol Insurance Company presents fairly, in all material respects, the financial performance and its cash flows for the year that ended in accordance with International Financial Reporting Standards and the requirements of the Companies Act 2009 and the Insurance Act 2016 highlighting that the company complied with all legal and regulatory requirements.

Highlights of the AGM were the reading of the audited financial statements by BDO, the question and answer and the interactive sessions.