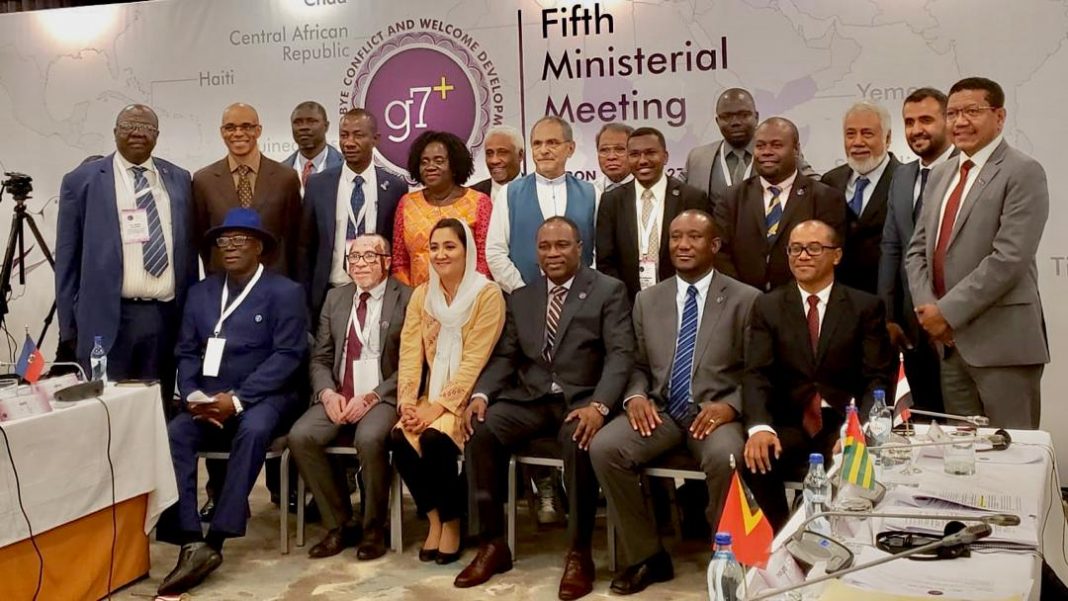 The Minister of Planning and Economic Development, Dr. Francis Kai-Kai has over the weekend concluded series of meetings in his capacity as Chair of the G7+ Group of Countries and Co-Chair of the International Dialogue on Peace building and State building (IDPS) in Lisbon, Portugal.

The theme of this year’s 5th Ministerial Meeting of the G7+ was: “Leading the change in Consolidating Peace and Development; G7+ perspective” which seeks to promote and advocate for country-led peacebuilding and state-building as the basis for any development framework and promoting effective institutions through assisting members in improvements in the spheres of politics, public administration, national resources, economics and finance.

In his welcome remarks, Dr. Kai-Kai reminded the meeting of the significant role that the G7+ Group plays in shaping global thinking about the fragility and the group’s objective of ending conflicts and poverty in fragile states. He said, “I want to recall the critical role the G7+ group played in successfully negotiating the inclusion of goal 16 on Peace, justice and strong institutions in the 2030 Agenda. The global community should pay special attention to countries in fragile situations in the implementation of Agenda 2030 due to the peculiarity of their circumstances”.

In a communique signed at the end of the meeting, the member states committed to adopting an introspective approach to tackling challenges that hinder peace and economic resilience in their respective countries; agreed on milestones in consolidating the G7+ as a group for making, building and sustaining peace and development and concretise advocacy and Peer learning to achieve agreed measurable benchmarks.

Speaking at the opening of the Steering Group Meeting of the IDPS, The Minister assured the Group of Sierra Leone’s commitment to continue providing political leadership to the platform and conveyed His Excellency President Julius Maada Bio’s desire to see that development works for the people out there and creates the much needed impact in their lives so that no one is left behind.

Sierra Leone will also continue to Co-Chair with Canada the IDPS, which is a tripartite arrangement between the G7+ countries, national and International NGO’s, and a network of bi-lateral and multi-lateral development partners.