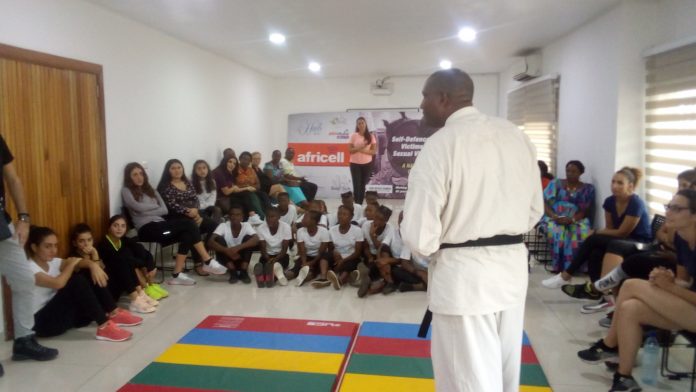 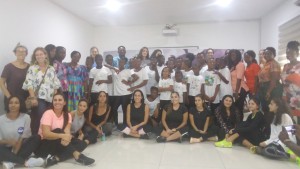 On Friday 31st May, 2019, Don Bosco with support from Zainab Mackay, held a one day Self-Defence training for Victims of sexual violence in order to educate and empowered them on how to withstand sexual violence in their communities.

Speaking at the ceremony, Zainab Mackay, who supported Don Bosco Fambul, said she is a Sierra Leonean living in the United States and is so passionate about empowering young girls. She recognized that sexual violence is a national crisis, which the nation needs to fight against.  “I cannot turn a blind eye to the reality about what is going on in the world, especially violence against women and girls”, she stressed.

She went further to say that during her visit to Sierra Leone to do a documentary, she discovered that lots of girls are suffering from sexual violence and thought it fit to organize such an event that will help to teach the victims basic skills on how to defend themselves in the event of sexual violence.

She called on citizens to join the fight to end sexual violence, as these children (victims) are the future leaders of the nation.

Mabinty kawa social worker at Don Bosco Fambul, disclosed that they have been working tremendously to ensure that they support children, especially girls across the country. She added that they are presently working with girls on the project ‘Girls Shelter’. This project is geared towards helping girls who have suffered from sexual violence and prostitution across the country. She went further to say that they have recorded 852 sexual violence cases, of which 450 are rape cases. This she maintained is not good for the image of our girls and the country as a whole and called on every individual to join the fight to end sexual violence against girls, adding that it is a big fight that must be fought together.

An early marriage and sexually abused victim thanked Don Bosco Fambul for their support. She said that since she came in contact with Don Bosco Fambul her life has never been the same. She further disclosed that she was sexually abused by two men at the age of 14 years. She further explained that she became pregnant, but lost the child after birth. She also explained that she was not going to school before, but now she is proud to say she is going to school and is happy because the perpetrators are in the male correctional Centre.