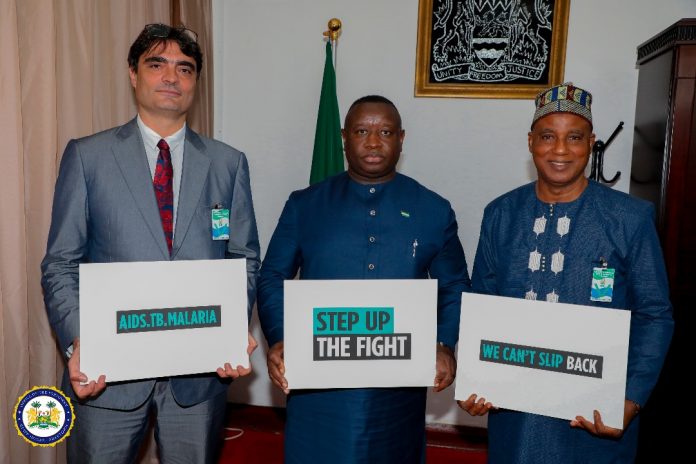 The Western Africa Regional Manager of the Global Fund, Nicolas Cantau, has held discussions with His Excellency President Julius Maada Bio at State House in Freetown.

The Fund is a 21st-century partnership organisation designed to accelerate the end of AIDS, tuberculosis and malaria as epidemics. Founded in 2002, the Global Fund is a partnership between governments, civil society, the private sector and people affected by the diseases. The organization raises and invests nearly US$4 billion a year to support programmes run by local experts in countries and communities most in need.

In his presentation, Mr Cantau said they were pleased with the achievements already made by the Government in the health sector, particularly in the fight against malaria. He said the mortality rate of malaria had been reduced by 50% in the last ten to fifteen years and observed that great progress was being made in dealing with tuberculosis and HIV.

He said the Global Fund had supported the health sector in the country through three different aspects – human resources on health, procurement and supply chain to ensure medicines reach the patients and on strengthening the availability and usage of data.

He said the Fund was created in order to fight the three most infectious killer diseases in the world – Malaria, Tuberculosis and HIV.

“Every three years, we organise a conference where we call all the supporters, donors and the implementers to discuss the impact of the Global Fund globally and to raise some additional funding to continue the fight, because the United Nations has taken a decision and there is a plan to end these three epidemics by 2030.

“It is a possibility because we have the tools, medicines and strategies to overcome the three diseases. We need commitment, leadership and funding in order to achieve this goal. We have one of the conferences this year and we need your support to demonstrate and testify the importance of the partnership that the Government of Sierra Leone has with the Global Fund, which is to be strengthened and continued,” he said.

On his part, President Bio expressed his sincere thanks and appreciation to the Fund for their support to Sierra Leone’s health sector, noting that many Sierra Leoneans had benefitted from the work of the Global Fund. He said with their support the country had kept in check some severe cases of HIV, tuberculosis, malaria, adding that under normal circumstances it would be extremely difficult to deal with by a country with very meagre resources.

“We know we have some responsibilities regarding the human resources and also working together to support the supply chain. We will do whatever that is necessary. For us, this is a big help and we want to make sure that it is effective on the ground and ensure that it goes down to help those that need it the most.

“This programme sits very well in our flagship programme of human capital development. We have made it our flagship programme because I believe that without good health, education and good nutrition, we cannot make progress in Africa. All of what we want to achieve would not be strengthened without a strong health system. So, the help Global Fund has provided is coming at a time we needed it most,” he said.