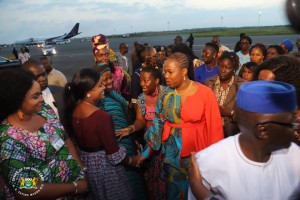 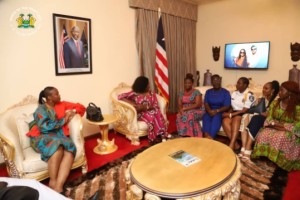 Mrs. Fatima Jabbi Bio, Sierra Leone’s First Lady, has called on women of Africa to work as a team to educate the men about the dangers associated with rape, to end violence meted against women and girls over the years.

Mrs. Bio made the remarks in Monrovia during the official launch of the “She’s You Movement”, the flagship program of Liberia’s First Lady, Clar Marie Weah.

The She’s You Movement aims to promote gender equality, women empowerment and to eliminate gender-based violence and other conditions that inhibit the potential of women and girls to be active participants in community and national decision-making.

Mrs. Bio said the First Ladies of the African continent are not ready to be silenced by any man on the issue of rape and other forms of violence against women and girls, adding, “We cannot tolerate rape in our society anymore.”

Mrs. Bio recounted how Liberia and Sierra Leone shared something in common by defeating the deadly Ebola Virus Disease and will work together to defeat domestic violence on women and girls. “We need to stop protecting rapists and say enough is enough,” Mrs. Bio stressed. She said it is easy to become a first lady, but more difficult if you do not have the support of your husband.

She said until Africa can work together as a team and makes the men understand through education about abusing the women, the men will not stop. “Let’s start educating our men, and the continent about ending the violence against women.”

Mrs. Bio said she believes that Mrs. Weah is prepared to add her voice to the many voices to help change the African Continent case, especially on rape and domestic violence.

“I’m not willing to be silent on rape. Mrs. Weah’s voice will be louder if everyone in Liberia stands by her and believes that ‘She’s You’ and one will not say such if you don’t believe it,” Mrs. Bio said.

The program was witnessed by thousands, led by the First Lady Mrs. Weah and Vice President Jewel Howard Taylor, as a demonstration of their condemnation of all forms of violence against women and girls in Liberia and Africa.

President Weah said development cannot succeed if violence continues to exist in the society, especially against women and girls. “Liberia will not be developed if the girls and women are left out,” he noted.

President Weah, who continuously praised Mrs. Weah for her kindness over the years, said the She’s You movement is perfectly aligned with the Pro-poor movement and appreciate the Liberian First Lady for the initiative.

Theodosia Slewion Kolee, chairperson of the National Aids Commission of Liberia said Liberia and other African countries have made commitment to end HIV/AIDS. Madam Kolee said Liberia has 39,000 people living with HIV/AIDS, which comprises 22,000 women, 14,000 men and 3,000 children.

First Lady Weah said the national advocacy program aims to ensure the improvement of women’s lives for a prosperous and better Liberia. The launch is a new movement introduced in Liberia, a nation that is so dear to her life.

Mrs. Weah said she feels the pains and trauma that abused women go through and it is time she sparked the conscience of society to remain awake and responsive to the plights of women and girls in the country.

“As these distinguished Liberian women are trade blazers in the advocacy of the rights of women, not just in Liberia but in Africa as a whole, I stand to support their worthy efforts and all women of Liberia, especially the market women,” she said.

Mrs. Weah said: “I rise to bring forth a revolutionary idea of She’s You movement. Additionally, we launched the free to shine campaign that hold as the bedrock the eradication of the HIV/AIDS for mother to child, a campaign whose time has surely come. The campaign is possible but depends on what the people of Liberia will do.”

Mrs. Weah went on to state that over the last several months, she has travelled to rural towns and villages interacting with women from all walks of life, including women, girls, men and boys and has been “inspired and moved to do something, which is now the She’s You movement,” she stated. She said the She’s You Movement maybe a dream of hers, but requires collective efforts.

According to her, this program seems to redefine the way Liberian men treat women and girls — with respect, unhindered access to education, political, social, economic, and access to equal opportunity for leadership for all levels.

“Pushing for the adoption for sound policy and enforceable legislation that will be keen on women and girls’ issues, and looking keenly on harmful practices such as child marriage and teenage pregnancy, which will be high on the She’s You Movement,” Mrs. Weah said.

She said building synergies with the First Lady’s flagship program is key to ensuring a harmonized approach to maximizing program impact at the national and sub-national levels.