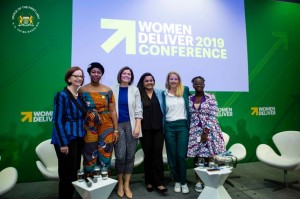 Women’s empowerment has always been the passion of First Lady, Fatima Bio since she was a teenager. She was a key speaker on the topic “Keeping Girls in School and Learning … Longer” at the Women Delivery Conference 2019 in Vancouver Canada.

Her Excellency said that the Sierra Leone government is championing Human Capital development in Africa and that the free Quality Education for Primary & Secondary school is impacting the lives of approximately 1.5 million children ibn the country. The holistic approach to education made the government include free school lunch & text books in the free quality education package.

This is the first time in the history of Sierra Leone where a political administration has declared free, quality education, with the highest budget allocation which was increased from 11% to 21%. The government is implementing policies that will make it more conducive for children Learn in every area, both formal and informal. “Sierra Leone is working towards building a great foundation because our most important resource is our human resource”. Mrs. Bio stated

First Lady Bio said she had discussions with other First Ladies and meetings with both Government and non-governmental organizations, to domesticate the issues, and get appropriate solutions. The discourse, led First Lady Bio to launch the home grown ‘hands off our girls campaign’ with very strong support from Sister First Ladies.

In addressing the issue of teenage pregnancy and the policy of excluding pregnant girls from school, First Lady Bio made it clear, that it is an issue for the Ministry of Education. She believes education is fundamental human rights, but every country faces its unique challenges, and it is the job of the Ministry to work out solutions based on their studies.

The issue of Female Circumcision was raised, this was not part of the topic for discussion, but in line with her stance, she said personally

“I have no issue with circumcision, I am a circumcised woman, and I have not experienced any of the negative impact some anti FGM proponents claim”. She has always maintained and she said she will not campaign against what she does not believe in.

She however said there is an MOU with the government of Sierra Leone, stating Female circumcision should only be done at the age of consent, which in Sierra Leone is 18. She agrees with this policy because it offers the freedom to choose, instead of a blanket ban being imposed which criminalizes its citizenry. She postulated, that the rite of passage ceremony continues, because of its cultural significance and advantage, but the “cutting” excluded for under-aged girls.

The issue of circumcision is being extensively studied at the grass-root level by the Ministry of Social Welfare, Gender and Children’s Affairs and the new administration is improving on previous government by having high level discussions with the real stakeholders in Sierra Leone: the Paramount Chiefs, religious leaders and the “Soweis” are the leaders of an All-female Society that perform the rite-of-passage ceremonies that signify a girl’s transition to adulthood. They have operated in present day Sierra Leone for centuries. Together they will come up with a workable program as opposed to imposing sensitization programs imported from other countries that are grossly ineffective.

The True Story of the Wellington-PMB Fire Disaster