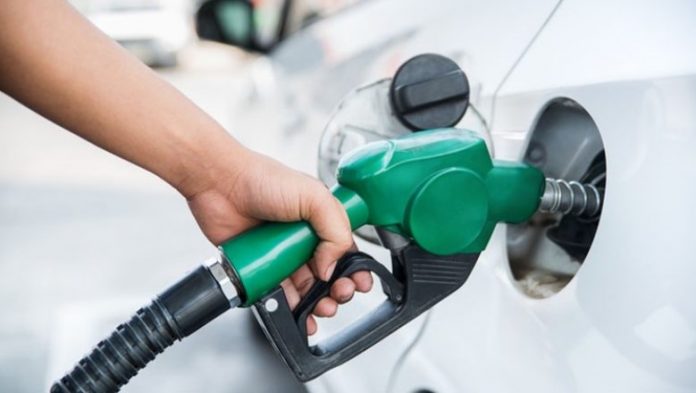 After weeks of speculation, prices of fuel have gone up in Sierra Leone. Petrol is now sold at Le8, 500 per liter, up from Le7, 000 per liter, representing a 15% increment, according to a statement from the government.

Officials of the Petroleum Regulatory Authority, which made the announcement, said it’s in response to factors prevalent in the international market.

The statement, which was jointly issued by relevant ministries and the oil marketing companies, said the reviewed prices were decided to reflect recent movement in the “PLATTS and foreign exchange rates.”

The announcement followed weeks of speculation fuelled by intermittent shortages of petrol. Since last Friday queues began lengthening after one of the leading petroleum exporting companies expressed concerns over the rising cost of exporting the commodities.

The increment in prices of pump is expected to force an increase in transportation fees, which is in turn likely to impact cost of living and make an already difficult situation more complicated for most Sierra Leoneans.

A major concern among many Sierra Leoneans is the reaction of commercial vehicle owners who have already threatened to raise their charges.

But Mr. Maywhether Thompson, Chief Director and Professional Head in the Ministry of Trade and Industry, said the government was planning to invite the Drivers’ Union for a meeting to discuss the way forward.

Though hike in fuel pump prices, commercial transportations’ fares are not to be affected, sector stakeholders agree 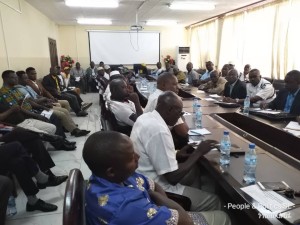 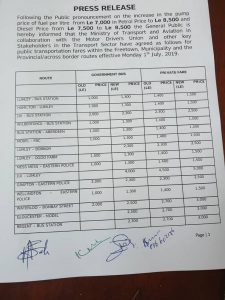 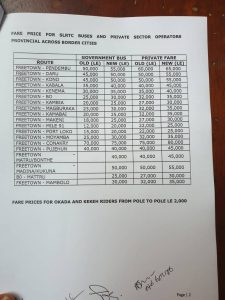 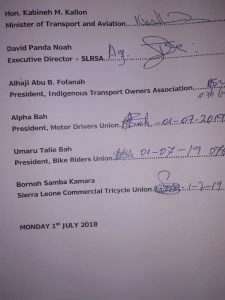 Prior to the modification of the fuel pump prices, the Ministry of Transport and Aviation in consonance with the ministry of Trade and Industry and Commercial transport heads had held a meeting to deliberate on matters revolving on the expected increase in prices and its resulting impact on point to point fares for motorbikes, tricycles (Keke), cars (taxis) and vans (Poda-Poda). The meeting was held on Thursday 25th June at the conference hall with all district heads represented.

Addressing the gathering, the Minister of Trade and industry Edward Hinga Sandy explained that due to extenuating circumstances of uncertainty of adequate supply caused by political unrest in Iran and other trade determining factors, there has been significant pressure on the demand from the oil market in other countries. This pressure has now manifested itself globally by a slight but significant increase in oil prices by the dollar and Sierra Leone is also susceptible to its effect.

However, the Minister assured that the increase will not exceed a thousand five hundred Leones (Le 1,500) on any of the oil commodities. Minster Sandy then called for the review of the fuel prices using the existing matrix as price determinant for new cost of oil commodities.

The Minister of Transport and Aviation Kabineh Kallon cautioned against exorbitant price hike in drivers’ possible nefarious efforts to extort travellers. He also warned against Oil marketers collaborating with certain individuals to create false scarcity of fuel in the country as this has the propensity to disrupt the flow of trading and normal daily routines of everyone.

The President of the Motor drivers’ Union, Alpha Bah, President Indigenous Transport owners association, Alhaji Abu B. Fofanah, President Bike riders union, Umaru Talie Bah and President Sierra Leone Commercial Tricycle Union, Bornoh Samba Kamara, all concurred that prices of point to point, will not be altered much as they have not been affected by much upon use of the usual matrix which all of them worked on.
It should be noted that even with this hike in Fuel pump prices, the cost of Fuel in Sierra Leone remains the lowest, compared to other subregional countries of Guinea and Liberia.

Minister of Trade Laments over Negative Effects of COVID-19