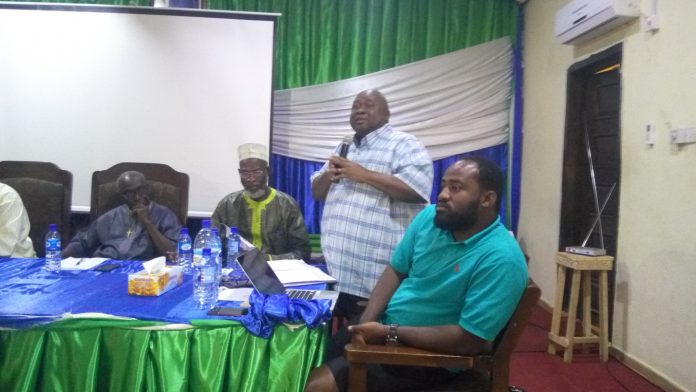 The Chief Health Education Officer and Programme Manager Health Education Division, in the Ministry of Health and Sanitation, Lansana Alex Conteh has said that the ongoing Demographic and Health Survey (DHS) gathers data on key health indicators of the country which he noted will be useful for effective planning by government and  implementation of health interventions across the country,

He was speaking on behalf of the Ministry of Health and Sanitation at a regional advocacy meeting held for paramount chiefs in the North East and North West Regions in Makeni City and Port Loko City on the ongoing Demographic and Health Survey over the weekend.

Pointing out the health benefits of the DHS to the Health Sector, Mr Conteh noted that they need credible and accurate date to improve the health indicators of the country for effective planning and implementation of health interventions across the country.

He reiterated that they are in dire need of high quality date on the following health conditions: fertility levels and preferences, the utilization of contraceptives, Infant, Child and Neonatal Mortality levels, nutritional status, and the level of awareness on HIV/AIDS.

Mr Conteh continued that they also need data to measure maternal and neonatal mortality and morbidity and associated causes, information on Family Planning, the prevalence of HIV in men and women in the country and behavioural risk factors related to HIV and also to provide information on the access and use of mosquito treated bed nets.

Mr. Conteh ended by urging paramount chiefs to enlighten their people, as a little prick of blood is demanded by the enumerators in the field to ascertain data on people’s health and that the test is done on the presence of both the enumerators and the individual.

Statistician General, Prof. Osman Sankoh at Statistics Sierra Leone said that though we are trying as a nation, the country is being rated as one of the least developed countries in the world because we cannot provide accurate date on certain development indicators which have to do with the development and health of our people. He further noted that the Demographic and Health Survey will look into these indicators which will help government, Non-Governmental and International Organisations.

Mr.  Sankoh further said that Sierra Leone is competing with countries in the Manor River Union, ECOWAS, Africa and the World for which we need accuracy and quality to achieve the Millennium Development Goals and now Sustainable Development Goals as per international standards.

Acting Director Demography, Health and Social Statistics, Sonnia-Magba Bu-Buakei Jabbi stated that they were craving for high quality data as they were using Information Communication Technologies (ICTs) like smart phones and electronic tablets to gather credible and accurate data for which the enumerators were trained and tools pretested.