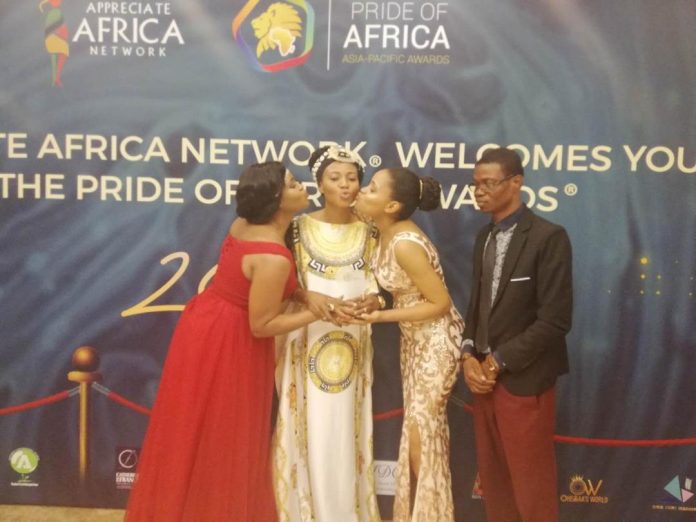 Sierra Leone Cultural Ambassador to China who is also a philanthropist, Mariatu Kargbo popular known as Maria has been recognized as one of the Most Influential People of African Descent (MIPAD).

MIPAD identifies high achievers of African descent in public and private sectors from all around the world as a progressive network of relevant actors to join together in the spirit of recognition, justice and development of Africa, its people on the continent and across its diaspora.

MIPAD is a global list that identifies, in total, 200 outstanding individuals under 40 years of age, with 100 inside Africa, 100 outside Africa in the diaspora across 4 categories; Politics and Governance, Business and Entrepreneurship, Media and Culture, Humanitarian and Religious.

Maria who is the founder of Mariatu Kargbo Foundation was recognized this year as one of the Most Influential People of African Descent in the media and culture category.

Speaking to this medium after receiving the award in China, Maria expressed delight upon receiving such an accolade as she said that this is a sign of appreciation in relation to the various charity works that she has been embarking on in Sierra Leone, China and other part of the world.

“I felt good for such award because I worked for it”.

This is not the first international award received by Maria. In 2009, Maria participated in the biggest contest in the world Miss World 2009 and her record is still intact as she won two awards out of the five in that competition. Maria is the first Sierra Leonean to be recognised in the Guinness Book of Record.  She also break the world record for raising the highest donation during the Sierra Leone, Guinea and Liberia Ebola crisis.

Maria said that such an award should have come earlier than this but she thanked God for the organisers to have recognised her good work at this time.

Maria promised to continue her charity work in and out of Sierra Leone so that she will continue to impact positively the lives of people.

“I believe in giving back. This is how it was for me when I was growing up and I will continue to do that.”

As her foundation, Mariatu Kargbo Foundation continues its drive of supporting the less privileged in Sierra Leone.

Maria raised the standard of children, mostly disabled ones, at the school named after her, due to her constant support to the teachers and pupils of that school, Maria Primary School, Polio Community Grafton in the east end of Freetown.

In supporting the government’s free quality education project in the country, Maria recently provided learning and teaching materials to over four hundred pupils of that school.

She has provided support to the youth of Lakka, Devil Hole and Waterloo. She is supporting developmental projects in and out of Freetown.

Maria was among other Sierra Leoneans like the first lady Fatima Bio and Akon that received the awards.