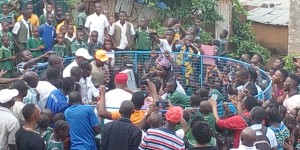 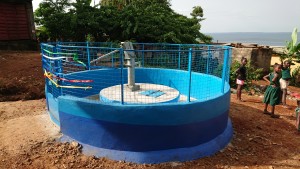 It was all smiles, laughter and joy on that sunny day when the young ,dynamic and result oriented Honourable Alpha Amadu Bah, popular known as Lawyer Bah of Constituency 115 in Wellington  on Wednesday 26th June 2019 commissioned a hand pump well at United Mission (UM) School, Upper Mellon Street in Ward 406 being part of a 79 Million Leones project. The project is funded by Heineken Africa Foundation through Sierra Leone Brewery Limited under a Water and Sanitation Support to the Education Sector targeting deprived schools across the constituency.
The project also includes the construction of 3 Compartment VIP Toilet at Koya Academy Secondary School, Koya Town, Wellington, Ward 405 in the same Constituency and the turning of the sod for the toilet was done earlier today.
The Chairman of the occasion, Hon. Amb. Alimamy Coleson-Turay and the Councillor and Youth Leader respectively excelled in their functions and unreservedly expressed their gratitude to Brewery and Honourable Bah for the laudable venture.

In his statement, the Corporate Affairs Manager of Sierra Leone Brewery Limited, Albert O. Collier, rained tremendous praises and commendations on the Honourable Member of Parliament of Constituency 115, Lawyer Alpha Amadu Bah, for exhibiting and demonstrating transparency and credibility throughout the successful implementation of the said projects adding that they were more than pleased and satisfied with it all as both projects were expected to benefit not only the pupils and staff of these various schools but also the various communities at large. “Our support today does not end here; it is the extension of the already existing relationship with Mellon Street community with more sustainable projects which will be intended to improve the livelihoods of our people,”he asserted.

However, beneficiaries of these projects who include teachers, pupils and residents of the community expressed overwhelming joy and appreciation beyond words that their struggle for water facility is now over thereby immensely applauding both the Member of Parliament, Sierra Leone Brewery Limited and Heineken Africa Foundation for bringing such a timely development to their doorsteps. They abundantly promised to maintain and keep it sustainable going forward. “My children will start enjoying safe drinking water and toilet facilities without resorting to go at a distance for them as it sadly used to happen,” Head Teachers of both schools appreciatively noted.

The projects were well appreciated by all and sundry.  David Adams Jusu, an SLPP stalwart, stoutly glorified Lawyer Bah Sierra Leone Brewery for such a marvellous and wonderful development in both communities adding that everybody must embrace development as the time for politics is long over saying it is time now to move the constituency forward.

“Development does not choose or want to know which political party you belong. Once there are developments as in the case of these toilet and water facilities, everybody within the community is bound to enjoy them devoid of political party affiliation or inclination,” he averred.