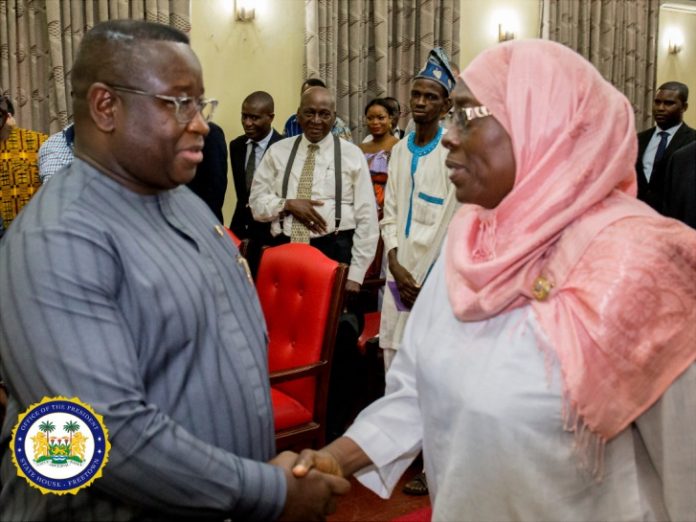 His Excellency President Julius Maada Bio has engaged members of the Krio Descendants Association (KDA) at State House, as part of his continuous engagements with different stakeholders across the country.

Special Adviser to the President and Ambassador at Large, Dr. Kona C. Koroma, who gave the welcome address, recalled that in his first meeting with the Krio Descendant Association after his inauguration, President Bio promised he would be having periodic engagements with stakeholders on issues of interest to the Association and the governance of the State.

She said over the past few days, there had been debates on land issues which had reached the President and as a caring father he thought it was in the right direction to call the Association for a family dialogue to discuss the issues.

In his opening statement, Deputy President of the Association, Ambassador Haja Alare Cole said they were thankful to President Bio for according them time to meet despite his busy schedules. She added that the meeting demonstrated a true manifestation of a leader who cares for his people. She said as an Association, they were pleased with the gains made so far by the New Direction Government citing the free quality education and the clearing of Lumley which she said had eased the traffic burden in that part of the city.

In his own contribution, another Krio shareholder, Samuel Valcarcel also expressed gratitude to President Bio for making time to meet with them. He said as an Association, they were faced with recent challenges which they had been looking forward to discussing with the President. He mentioned that President Bio had shown leadership qualities as father of the nation by creating the platform for them to explain few of the challenges facing them, while expressing belief that those issues would be settled amicably.

‘’Last week, we had a general meeting as an Association where we spoke about many of the things affecting us especially the one dealing with land. In the past weeks, we have all been discussing land issue because the Lands Ministry issued a statement challenging the legitimacy of our land documents and that has left us worried. Another worrying issue for us is the Land Tenure System which barred Krios from acquiring lands outside Freetown. So we are happy to be here because we believe such an engagement will help resolve these issues,’’ he said.

Leader of the Unity Party, Femi Claudius Cole, who also attended the meeting, said she was impressed with President Bio’s timely intervention adding that the meeting was welcoming especially at a time the country was preparing for the Bintumani 3, where she was excited to be participating. She said matters of land issues were developing mixed feelings among people especially in Freetown adding it was a great move by the Government to start chatting the way forward for a sustainable solution.

In his response, President Bio said he decided to call the meeting because he knew some members were not happy about certain things happening in relation to land issues in the Western Area. He said he had decided to engage the Association because dialogue was the best means of getting a sustainable way of resolving the issue.

‘’Our country is one of Rule of Law and that must be accepted by all of us. I have decided to call you all here to let you know that I take your concerns very seriously and that Government will look into them.  We will be developing a framework to put to an end to all the land related issues across the country. We want this meeting to be the start of a dialogue process because that is the only way of arriving at the best solutions as we need a united society that will allow development to thrive,’’ he said.