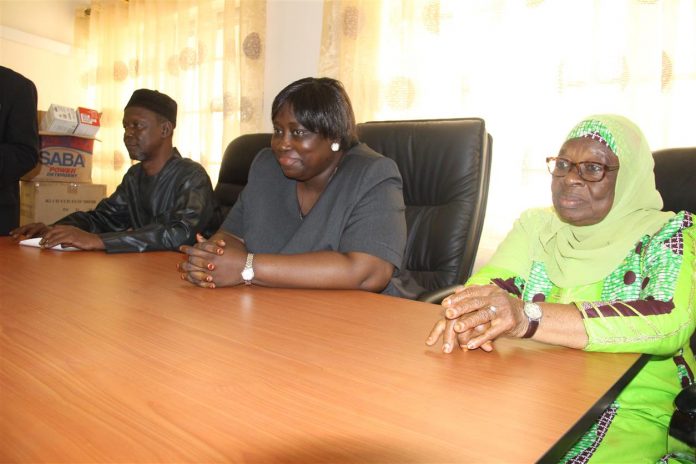 The Chair of the Legal Aid Board, Justice Miatta Samba, has told staff of the Board that she appreciate the work they are doing around the country to increase access to justice. She made these remarks while opening the three-day UNDP funded training workshop on the ‘Laws, Legal Processes, Monitoring of the Justice Delivery System and Alternative Dispute Resolution (ADR)’.

Justice Miatta Samba encouraged staff to do more when they go back to their duty stations. She added that despite the increase in the demand for their services, they should always endeavor to maintain high standards as they go about their work.

She said Paralegals are doing an important job in increasing access to justice especially in remote communities. Underlining the importance of their work, she stated that she had thought of pursuing a course in Paralegal studies before becoming a lawyer. Justice Samba said the Board is working with the judiciary to start the certificate course in Paralegal Studies at the Justice and Judicial Training Institute (JLTI).

Justice Samba said that the Board is not oblivious of concerns among staff especially Lawyers regarding conditions of service. She assured that they had had meetings with various stakeholders in government with a view to addressing the issue and would continue to do so.
In her overview of the workshop, the Executive Director of the Board, Ms. Claire Carlton-Hanciles said it is important to meet once a year to learn how to deliver quality legal aid, look at compliance issues, discuss challenges and share experiences.

‘We need to learn a lot more about our work in the formal and informal courts and how to enhance collaboration with partners so as to reach out to more people who need our services around the country,’ she said, adding: ‘We have to take advantage of the fact that we have a Chief Justice who is defense minded and ready to give all the support to ensure people do not suffer any miscarriage of justice. He ensured that the habeas corpus applications we filed were heard speedily. As a result, we have succeeded in securing the release of all inmates who have been in correctional centers for over five years without indictments.

The representative of the United Nations Development Program (UNDP), Ms. Claire Flynn-Byrne, said the agency recognizes the role of the Board in promoting the Rule of Law and Access to Justice. She noted that she looks forward to staff engaging on these important issues.

The lead resource person, Justice Ansumana Ivan Sesay, presented a paper on ‘Laws, Legal Processes and Procedures.’ He opened his presentation by saying that the country cannot boast of an effective legal system without an effective Paralegal system in place.
This is because 80% of the population seeks justice through the informal system – Local and Traditional Courts – where lawyers cannot make any representation. ‘This is where the Paralegals come in to provide advice and legal assistance to both administrators and users of these courts.’
Justice Sesay explained the structure of the legal system focusing on the judiciary. He examined two areas which are the courts – Supreme, Appeal, High, Magistrate and Subsidiary Courts – and the Appellate system. In addition, he also touched on the Constitution, Customary Law, Equity and Statutory Laws.

Justice Sesay underlined the need for Paralegals to know the difference between civil and criminal matters. He stressed that this will help them know the cases to mediate and those to refer to the Police or the Local Courts. ‘Most of the cases you mediate relate to Maintenance, it is therefore important for you to know the laws relating to maintenance as a guide,’ he stressed.
He drew attention to concerns from the public regarding the way Customary Laws and Practices are interpreted by Local Courts. He noted that women suffer the most regarding the manner customary laws are interpreted by the Local and Traditional Courts. ‘You can protect the women against discriminatory customary laws and practices by challenging those which are incompatible with General Law,’ he stressed.

The presentation on ‘Alternative Dispute Resolution (ADR) Processes and Procedures’ was led by Consultant Francis Gabbidon and Reverend Bob Kandeh. The discussions that followed centered around the various forms of ADR, ensuring a conducive environment for mediation, counselling for traumatized clients, referrals, handling aggressive clients, how to seek help when mediating complex civil matters such as Will and Inheritance matters, response to respondents who refuse to heed invitations for mediation, avenues for appeal for those who are dissatisfied with mediation, mediating matters bordering on Customary Laws and Practices and challenges relating to enforcement of settlements reached following mediation.

It was agreed that where a respondent refuses to comply with an invitation to appear before the Board for mediation, a lawyer should be assigned to the matter for court action.
Other presentations include: Accreditation of Legal Aid Service Providers, Monitoring and Evaluating the Quality of Legal Aid Provision; Data Collection and Reporting; Engagement with the Media to Promote Access to Justice and Human Resource Development.