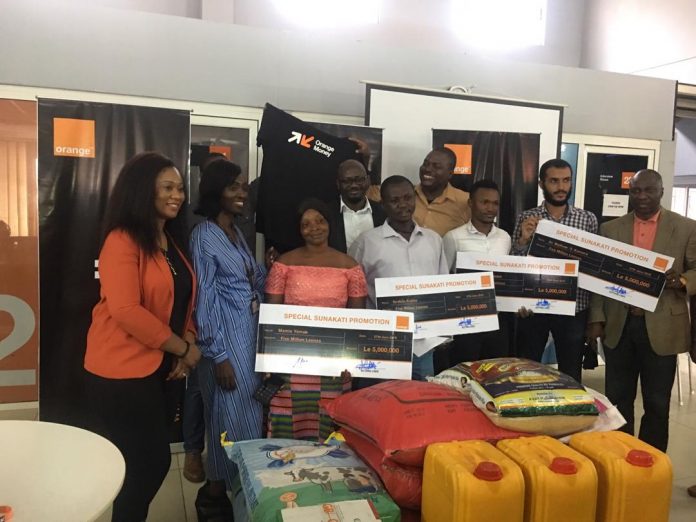 At the Orange headquarter, Hill Station, in Freetown on Wednesday 26th June 2019, the company handed over one year worth of food items and five million Leones cheques to each of the five lucky winners in the just-concluded Orange Special Ramadan Sunakati Promotion. 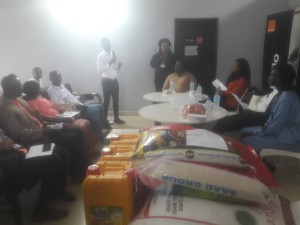 In his welcome remarks Annie Wonnie Katta, Public Relations Manager, congratulated all four hundred and five (405) winners nationwide, She said Orange officially started operating in Sierra Leone in 2016 and within the shortest period of time it became the most reliable and affordable network not only in Sierra Leone but within the 20 countries that they operate. She said their aim is to provide qualitative and affordable services as well as give back to society.

She encouraged them to spread the message of reality when it comes to Orange activities.

Speaking during the presentation Sheikh Omaru Jalloh, Mass Marketing and Bundle Executive Officer for Orange-SL said the company is a Premium and Global brand which is why they do things within the context of international standards. The Orange Special Ramadan Sunakati promotion was launched on Thursday 2nd May 2019 at the Calaba Town round-about, eastern part of Freetown.

The daily draws were conducted within 6 weeks while the weekly draw ended within 5 weeks during the draws’ final grand draw at the SLBC 5 lucky subscribers won one year food supply for their families with cash for each of them.

“We included the Orange Money agents and retailers in the draw because they are always there to serve the customers and they have been doing well in that direction, which makes orange a family,” he disclosed adding how Orange also offers voice and data promotion as Ramadan Special Sunakati,

Instant 50% bonus on every data bundle  a subscriber using Orange Money #144# on Wednesday will receive 100%  bonus via Orange money through the short code #144#, 20 Minutes talk time +30MB + 30 sms for just Le3,990 by dialling *888# to subscribe. These are all special offers granted through Orange Ramadan Special Offers.

CEO Orange Money, David Mansaeay, congratulated the five lucky winners and said orange money has dominated the electronic finance transaction in the country. He said it now makes transaction easy and reduces the risk of robbery and theft, and this is one aspect of development.

He maintained that Orange money is being operated in all the four corners of Sierra Leone.

Haffic Hafner, General Secretary Orangs EC’s said Orange sees its customers as part of the Orange family. He stated that Sierra Leone is a religious tolerant nation which is why their offers  cut across from Christmas to the month of Ramadan and it has been working well.

“This is the first time a GSM company is providing one year food items and cash of five million Leones for its customers,” he said underscoring that they are passionate to give customers’ stratification and also change the lives of Sierra Leoneans through their Corporate Social Responsibility.

Mammie Yamah a Primary School Teacher from Kenema said everything was like a dream to her maintaining that being a teacher she never thought of saving one year food items for his family, but Orange has made it possible for her disclosing that they are very much delighted and short of words.

Another winner, Musab Mbaly, an Egyptian Mechanical Engineer working for Ataa Organization based in Makeni said as foreigner he was disturbed when Orange kept calling his as he can’t speak Krio, so he thought it was a scam “  I have to call my friend who explained to me saying at first he did not take it serious but today they are present to collect one year food items and cash,” he expressed delight saying to give to Muslims in the month of Ramadan is a great thing and as a Muslim he commended them for the great job they are doing.

Rtd. Major Dr. Kamara, Lecturer University of Makeni, another winner, said that now he knows everything is relayed, he and other winners will serve as ambassadors of Orange SL.