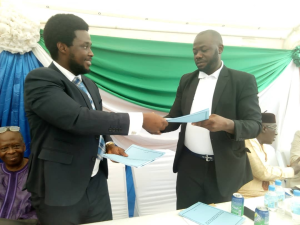 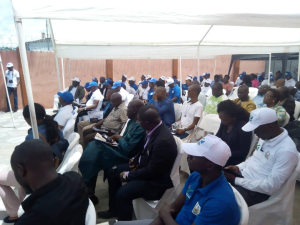 During an auspicious ceremony that took place in Bo, Southern Sierra Leone where the National Public Procurement Authority (NPPA) opened its second regional office the Chief Executive Officer of the Authority, Ibrahim Swarray, received a standing ovation from residents and other personalities present.

The ceremony which according to the Board Chairman of the NPPA, Mr. Alfred H. Kandeh, is long overdue attracted Members of Parliament including the Leader of Government Business, Hon. Mohamed Sidi Tunis, Deputy Leader of Government Business and Chairman, Information and Communications Parliamentary Oversight Committee, Hon. Matthew Nyuma, Resident Ministers of the  South and Eastern Provinces, Paramount Chief Boima of Kakua Chiefdom, Mayors Kenema and Bo Town Councils and other representatives of  local councils across the country.

The NPPA Board Chair disclosed that it was long envisioned by the pioneers of Public Procurement including himself that based on statistics the National Public Procurement Authority should as a first step in the decentralization process of procurement processes, open up an office in Bo.

This according to him was frustrated by the previous APC regime to open an office in Makeni for no reason.

He concluded by noting that he is happy to have witnessed such an achievement coming to fruition.

Leader of Government Business, Hon Tunis noted that they are honoured on behalf of the leadership of Parliament to grace the historic occasion and highlighted the fact that this is indicative of the fact that government is serious about controlling leakages and also driving the process of accountability and transparency in the management of public funds.

He stated that they in Parliament are hugely impressed with the level of reforms at the NPPA under the leadership of Mr. Ibrahim Swarray.

Resident Ministers East and South also underscored the point that establishing an office in the south resonates with the New Direction peoples manifesto which calls for a disciplined leadership towards the management of state resources.

They both commended the NPPA Chief Executive and his entire team for brining transparency and accountability to the door steps of the people.

They urged local councils to make use of the opportunity and feel free to do their work more effectively.

Representatives of both Mayors of Kenema and Bo City Councils and their District Chairmen expressed appreciation for the establishment of the office and assured all that they would ensure that they maximize better outputs in undertaking their procurement activities henceforth.

The National Public Procurement Authority boss noted that he feels elated by the series of commendations he has received and the level of attendance and support towards the opening of the Bo office in the southern region of Sierra Leone.

He thanked the President for reposing such confidence in him to lead the NPPA little over a year ago and that even though people doubted his ability to do the job ,he is quite aware that as a practicing procurement officer he was equal to the challenges ahead of him.

Mr. Swarray further added that he would do more at the NPPA and that the work has not started yet.

He specifically addressed practising procurement officers to redouble their efforts and put Sierra Leone above personal interest and disclosed that the NPPA now has an Electronic Procurement Directorate.

Practicing Procurement officers, according to him, should change their modus operandi as Government is almost on the verge of going e-procurement across the board.

‘’The New Direction is not going to wait for a Commission of Enquiry or an Audit Report to show the level of misappropriation of state funds, but we are going to work to ensure that MDAs and Local Councils follow procurement processes from the start,’’ a confident CEO reiterated.

Mr. Swarray told Members of Parliament, local council representatives, Government Ministers, traditional rulers, civil society and the media that he invited the ACC Commissioner to the opening ceremony of the southern region office not only to serve as keynote speaker but also to get him to sign a Memorandum of Understanding between the ACC and the NPPA.

The MOU he concluded is intended to further bind the two institutions more concretely to protect tax payers’ monies.

While delivering his keynote address the Anti-Corruption Commissioner, Francis Ben Kaifala, applauded the NPPA for opening an office in Bo, Southern Sierra Leone and noted that it was part of the exercise to continue to open the transparency space in the country.

The ACC boss commended the NPPA Chief Executive and his entire board and staff for the strides in protecting the tax payers’ monies and bemoans the fact that Sierra Leone is still very low at the human development ladder largely due to corruption.

The climax of the ceremony was the signing of the MOU between the two institutions and the official opening of the NPPA Southern region office by the Resident Minister, South, Mohamed K. Alie on behalf of President Bio.