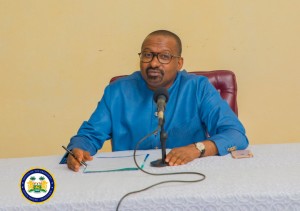 Welcoming Ministers, Deputy Ministers and members of the Press, the Press Secretary & Presidential Spokesman, Yusuf Kenetoma Sandi, expressed sincere thanks and appreciation to members of the press who he said had always reported the activities of the President, Vice President and First Lady. Press Secretary told the Press Conference that the New Direction Magazine is about telling their own story, and that of the work of Ministries, departments and agencies.

“What we have done in the magazine is to focus on the key priorities of the government and achievements that have been made over the past year. We have also focused on narrating the story of a president by the President himself as was graciously captured in his speech at the TED 2019 Conference in Vancouver, British Columbia, Canada earlier” he expressed. He further stated that the magazine will add to the collection of literature on the legacy President Bio is building.

Honorable Vice President said he was very delighted to be a part of the driving vehicle of the New Direction government, and launching the one year magazine. He stated that the magazine catalogues the concrete achievemens of their government in a storytelling fashion. Vice President Juldeh maintained that the magazine also captured the Medium Term Development Plan in which it mapped out the immediate and long term plan.

“The Medium Term Development Plan that was launched previously by the New Direction government is geared towards transforming the Human Capital development, and this is at the center of the government” he noted.

“The New Direction government has provided teaching and learning materials to all government and government assisted schools across the country. We have also provided furniture, reconstruction and rehabilitation of additional classrooms, sanctioned approval of schools, but most importantly tackling examination malpractices,”  he observed.

The Honorable Vice President emphatically told the gathering that there has been a high revenue performance during the presidency of His Excellency Dr. Julius Maada Bio. He added that the International Monetary Fund (IMF) has been impressed with the government and thus extended their credit facility to the government. The Vice President said that they had been able to build the infrastructure of domestic revenue mobilization.

Dr. Juldeh Jalloh also added that the New Direction Government has given the Anti Corruption Commission (ACC) the political will to fight corruption, thus he said that the ACC has recovered stolen monies by corrupt officials and prosecuted those involved in corrupt practices.