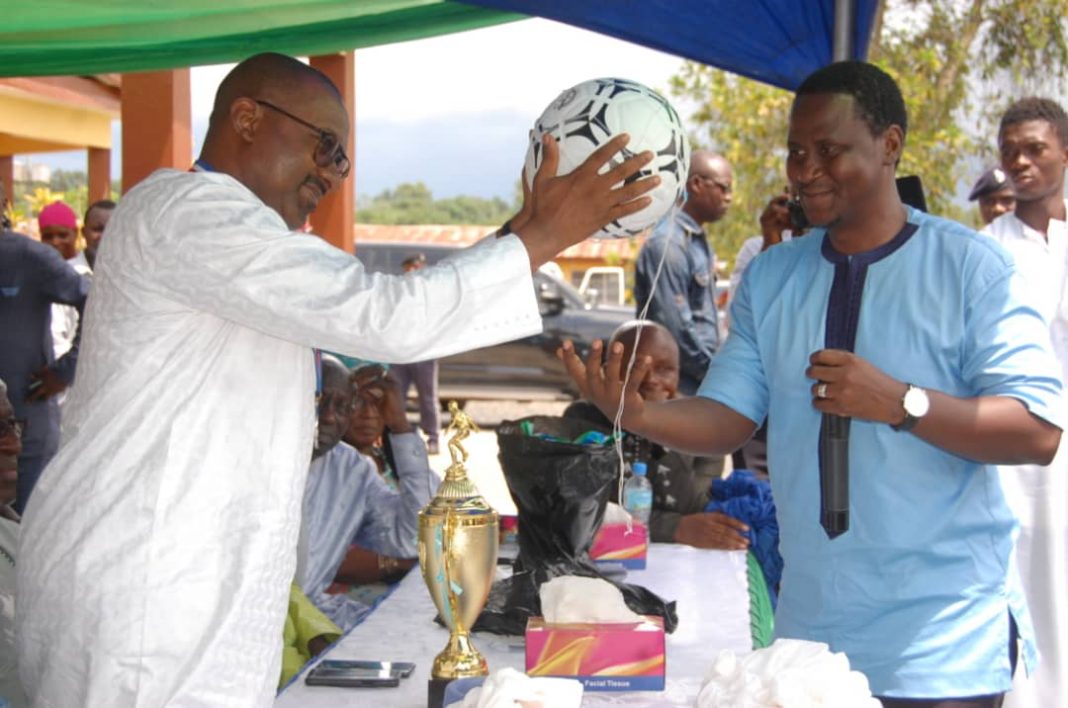 To set the record straight Sierra Leone’s Vice President Dr. Mohamed Juldeh Jalloh has refuted statements made by certain politicians that there is presently palaver in Sierra Leone. The Vice President maintained that there is no palaver in the country, but revealed that the reality in Sierra Leone is that the Sierra Leone Peoples Party won the 2018 Presidential election and is ruling the country but the opposition is behaving otherwise. He therefore said that the SLPP should be allowed to rule the country. He made the statement while addressing stakeholders in Port Loko City at the Presidential Villa on the 4th May, 2019. Dr. Jalloh recalled that late President Ahmed Tejan Kabbah conducted the 2007 Presidential election that was won by the then opposition All Peoples Congress (APC) Party whilst the then ruling Sierra Leone Peoples Party lost the election. He added that the SLPP accepted the defeat and allowed the APC to govern the country with peace without jumping on the street to fight. “If APC accept defeat, there will be no problem. But there is nothing like palaver or tension in the country, people are manufacturing palaver”, he emphasized.

The Honourable Vice President informed the gathering of the New Direction Government’s determination to move the country forward with better development, but cautioned that the Government will not hesitate to deal with anyone who flouts law and order. He furthered that no one is above the law of Sierra Leone; therefore, anybody who disturb public peace will be dealt with accordingly whether you are present or past official. He called on opposition parties especially the main opposition APC to respect the law, to allow peace, and to obey law and order in the country. “The SLPP led Administration is ready to develop and move the country to a better place at the Global stage. ‘We will not allow anybody to divert our attention from the New Direction Plan which is in implementation” he re-echoed.

The Vice President expressed dismay at people calling for justice, he explained justice as the act of people speaking truth to perpetrators of violence and hooliganism. He further explained that justice is the art of stakeholders condemning act of violence by politicians in power who terrorized their own people just because they are opposition supporters. He referenced the beaten with broken legs of then opposition SLPP loyalists by hoodlums sent by the then former Minister of Works Alhaji Kemoh Sesay, and the burning down of houses of the opposition SLPP supporters including the house and private school of the present Deputy Minister of Basic and Secondary Education Mrs. Emile Gogra in Port Loko District by APC thugs of Kemoh Sesay. Vice President Jalloh in no nonsense terms expressed his disappointment at religious leaders and statesmen/stakeholders in the country especially in Port Loko District for not condemning the brutal act that was perpetrated by the APC in Port Loko District and the country in general.

Dr. Jalloh encouraged former President Ernest Bai Koroma to act as a Statesman. He noted that the Government of President Julius Maada Bio fully recognizes former President Koroma as a Statesman; therefore, he is expected to behave in such a  manner. Sierra Leone, Vice President Jalloh reiterated, has peace and there is no conflict, the only conflict he told the people is APC refusal to accept defeat and give peace a chance.

He informed the people that Port Loko has only one party, which is the Port Loko Peoples Party. The Vice President encouraged his kinsmen to put the interest of the district first and above political party interest for the growth and development of the district. He also appealed to SLPP supporters to accept Bai Bureh Warriors and help contribute to the growth of the team for the sake of peace and development in the district whether the present management of the team is APC or not, especially now he has been given the status of patron member. He assured the people of his continued support to the district.