It could be recalled that there have been numerous complaints from the Krio community claiming that the Minister of Lands, Dr. Denis Sandy is unilaterally and unlawfully seizing their lands.

This comes after several weeks of anger and frustration felt across the Krio community in Freetown over accusations of forceful land grabbing by the Ministry of Lands.

However, President Julius Maada Bio has met with representatives of the Krio Descendants Union (KDU) at State House to settle the impasse. 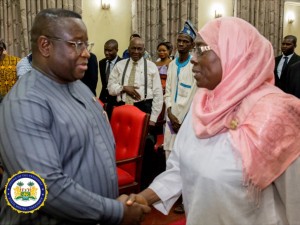 State House sources informed journalists that the meeting was part of the President’s continuous engagements with stakeholders across the country.

Speaking at the meeting, Special Adviser to the President and Ambassador at Large, Dr. Kona C. Koroma, recalled that in President Bio’s first meeting with the Krio Descendants Union after his inauguration, President Bio promised to have periodic engagements with KDU about the governance of the state.

She added that over the past few days, there have been debates about land issues which have prompted the President to call the KDU “for a family dialogue”.

Deputy President of KDU, Ambassador Haja Alari Cole said they are thankful to President Bio for meeting with the KDU representatives, despite his busy schedule.

She added that the meeting demonstrates a true manifestation of a leader who cares for his people. She said as an Association, they are pleased with the gains made so far by the New Direction Government – citing the free quality education and the clearing of Lumley, which she said has eased the traffic burden in that part of the city.

Leader of the Unity Party, Femi Claudius Cole, who also at the meeting, said she is impressed with President Bio’s timely intervention in the land row, and welcomed discussions with the President, especially at a time when the country is preparing for the Bintumani 3 peace and reconciliation conference.

She said that this latest land row is creating mixed feelings among people – especially in Freetown, and welcomed the Government’s move to start finding a way forward for a sustainable solution.

In his response, President Bio said he decided to call the meeting because he knew some members of the Krio community are not happy about land issues in the Western Area. He said he decided to engage with KDU because dialogue is the best means of finding sustainable solution to any problem.

“Our country is one of Rule of Law and that must be accepted by all of us. I have decided to call you all here to let you know that I take your concerns very seriously and that government will look into them.

“We will be developing a framework to put to an end all the land related issues across the country. We want this meeting to be the start of a dialogue process because that is the only way of arriving at the best solutions, as we need a united society that will allow development to thrive,’’ he said.

As Cost Of Living Soars, Difficult Times Lie Ahead…