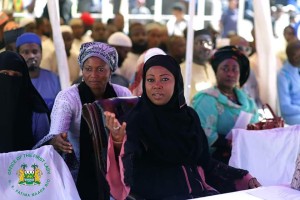 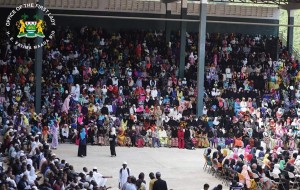 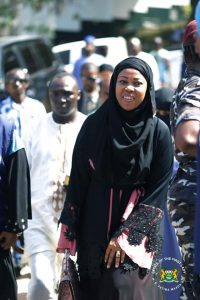 First Lady Mrs. Fatima Maada Bio has called on Muslim women to take their role seriously in their respective communities. She told them that: “Being a Muslim woman doesn’t limit you to the kitchen alone. Our responsibility as Muslim women is to make sure things work for our home, community and our nation.”

The First Lady was speaking to her audience gathered at Fourah Bay College on the occasion of the 6th National Quranic memorisation competition 2019 organised by the Foundation of the Islamic Information, Sierra Leone Limited (FOISIL) where she served as a special guest of honour.

She added that the essence of the Quranic competition is to reward deserving competitors who have mastered the Quran and is also a way of inspiring young people to learn the art of reciting the Holy Quran.

HE Fatima Maada Bio received the Ambassador Siray Timbo Award alongside the Vice President Mohamed Juldeh Jalloh. Attending the competition were a cross-section of Muslims around the country and supporters of Islam.

Speaking in the capacity of Guest of Honor at the event held by FOISIL on 19th May 2019 at the Adjai Crowther Amphitheatre, she maintained that the essence of the Quranic competition is to reward deserving competitors who have mastered the Quran and as a way of inspiring more young people to learn the art of reciting the Holy Quran.

The First Lady called on other Muslims and non- Muslims to support the Quranic memorization competition, saying that ‘this is one of the ways we can show the world that our religion is peaceful.’ She said whenever she stands to talk for Islam, she talks the right thing so the listener would understand exactly what Islam is all about and the role of women in Islam.

“We are not only peaceful but we celebrate one another and we protect one another. Most times when I go the mosques, I go along with the JMB Women and most of them are Christians and I tell them to worship as I do. It’s not a way of forcing them but I always try to let them know how peaceful our religion is,”Fatima Bio said

Alhaji Abdul Latif Kargbo the Director of the Foundation of Islamic Information thanked all the Muslims for their attendance and called on the Muslim “Ummah” in Sierra Leone to continue to show love for the Quran especially during the holy month of Ramadan.

The event attracted over one thousand Muslims across the country. The winner of this year’s competition was graded over 90 per cent by the judges. The competition attracted representatives from all the regions.