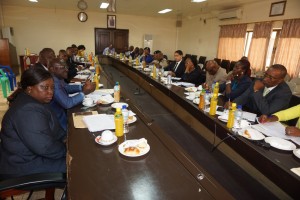 The Executive Director National Youth Service, Onanah Jalloh, has disclosed to a 5-man delegation from the United Nations New York office that his institution was created to cater for young graduates in the employment market by creating the work opportunities and sustainable livelihood.

He was speaking yesterday at a round table meeting held at the Office of National Security (ONS) conference room organized by the Ministry of Youth Affairs in partnership with the UN Resident Coordinator about the security risk around young people.

According to him, the NYS is a key solution for the growing youth unemployment in the country, adding that with the Kenya model, the current Government will achieve the middle level manpower as envisioned in the medium term development plan, 2019 to 2023.

He said the first batch of 200 graduate corps have been recruited and deployed across the country for a dedicated one year service. He went on to state that before the end of the year, NYS will also recruit 500 young graduates. He assured that at the end of August, 2019 the application forms will be made available to the public.

“We have developed five pillars in tandem with the proposed  Act that will soon be reviewed,” he said whilst emphasizing that pillar one will be paramilitary training and service regimentation; pillar two will be youth socialization; pillar three will focus on social mobilization and vocational training; pillar four is enterprise and youth economy and pillar five is bankable institutional architecture.

Dilating on the purpose of the round table meeting, the Deputy Minister of Youth Affairs, Hon. Lusine Kallon, said they are about to commence a joint assessment mission with the UN New York team and other relevant stakeholders in the country to know the patterns of recruitment and mobilization of young people into cliques and gangs in rural and urban areas.

He added that the assessment will try to identify elements that could contribute to empower youth at risk.

“There is no mistake to start our joint assessment mission to identify the strategy or strategies used to recruit vulnerable youth into a gang or clique groups,” he averred.

The Deputy Minister submitted that “you will all agree with me that the experiences and prospects of youths in Sierra Leone require careful consideration.”

In that regard, he went on, “let me now assure you that this government is demonstrating that a youth crisis of that nature will now belong to the past. We are sensitive to the needs of our young men and women because they are the lifeblood of this great nation.”

He informed that under the distinct leadership of President Julius Maada Bio, they have laid the solid foundation and the country is speedily building on them for concrete development.

As a government, he continued, “we believe we cannot do it alone and therefore we are grateful to the United Nations Country Team and the UN Resident Coordinator for consenting to work with us to undertake an assessment on youths at risk.

Mario Nascimento, the UN Policy and Planning Officer for Disarmament, Demobilization and Reintegration encouraged the Government to create an environment that suits the youth.

He said government alone cannot provide jobs needed for young people and recommended for a strong partnership with the private sector.

The Minister of Youth Affairs, Mohamed O. Bangura said he has got the right team to work with amidst low staffing capacity. He called for more support to implement projects that will ameliorate the challenges facing our youth.

Representing the Inspector General of Police, Inspector Henrietta Sesay, recommended that the Ministry of Youth Affairs should partner with the Local Police Partnership Board in the dissemination of information to the targeted youth.