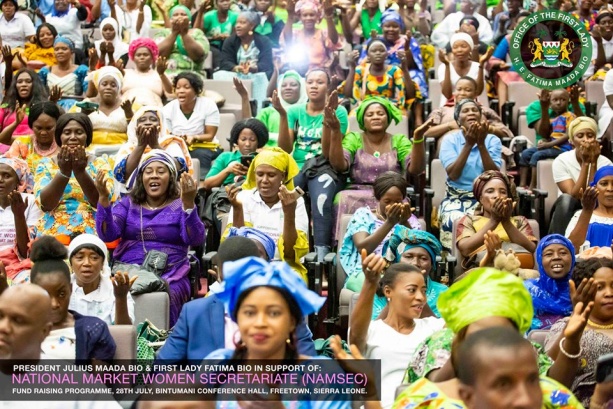 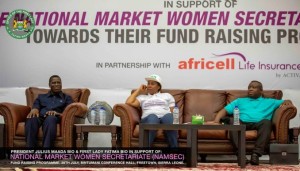 The National Market Women Secretariat NAMSEC is an initiative organized by the Market Women of the Republic of Sierra Leone. First Lady Fatima Maada Bio, recognising the pivotal role market women plan in our economy also gave them her full support.

Delivering his keynote address, His Excellency Rtd, Big. Julius Maada Bio, outlined the importance of women in society, which according to President Bio is most times taken for granted or not even recognized.

H.E Bio admonished the market women to invest in their children, as they are their greatest asset, who will benefit their families and the nation. He said his government is committed in ensuring the free quality education is of benefit to every child irrespective of tribe, region or political affiliation.

According to President Bio, women are bread winners in most homes, hence should be should be capacitated; His Excellency made it clear, his obligation is to every Sierra Leonean.

His Excellency encouraged the market women to embrace peace and unity and pay keen attention to his delivery on the promises he made during election. Most politicians make empty promises, but his government is committed to making Sierra Leone a safe haven before the end of his term in office.

Speaking on behalf of the market women, First Lady, Madam Fatima Bio thanked President Julius Maada Bio for making the issues of market women and their launching and fundraising ceremony his top-most priority.

Madam Fatima Maada Bio disclosed that the free medical facility for school children, which the market women have not been utilizing, while taking them through the processes involved in accessing the facility provided by the government through the Ministry of Health and Sanitation.

The First Lady emphasised on the life insurance policy plan that Africell has introduced and its importance, stating that Africell has paid over one million US Dollar of the policy holders. She promised a whole new system of micro credit, that’ll be organised by the secretariat.

She underscored the importance of having a hygienic and user-friendly market place and promised to work with them through the NAMSEC.

The First Lady concluded by encouraging other market women to register with the National Market Women Secretariat (NAMSEC).

The Women Leader of NAMSEC, Ms. Kadie Winner, stated some of the challenges they faced, but were ready to do what it takes to solve these problems together.

Other highlights of the event include, the fundraising session that was championed by the chief minister, Professor David Francis and Chief of Staff of the First Lady. Shek Salim Fieka was also in attendance.