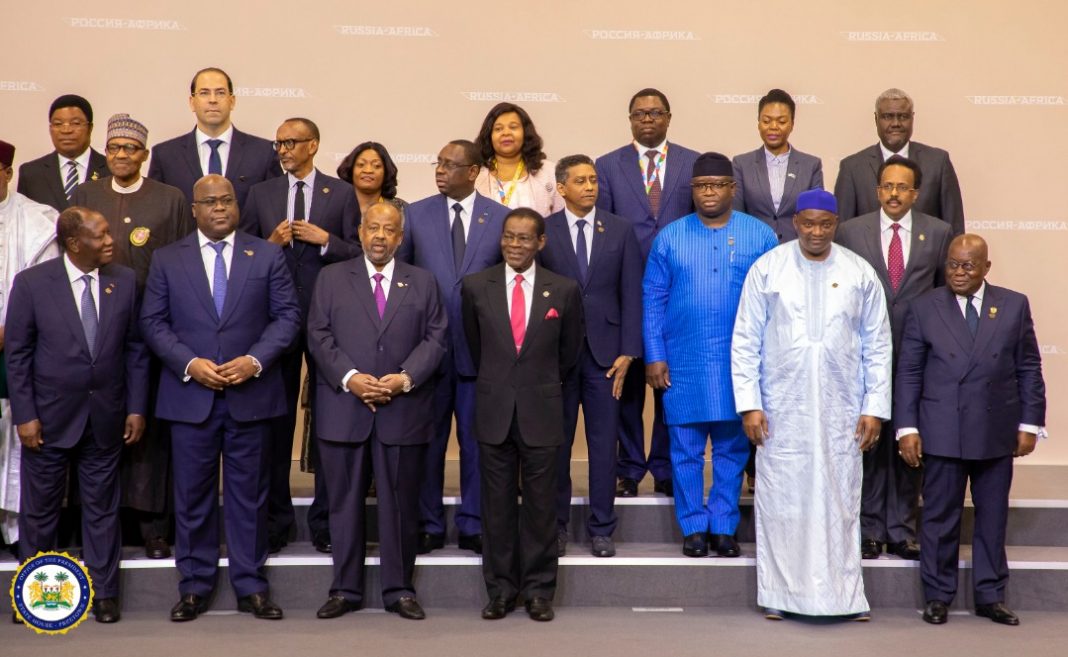 In Sierra Leone, whenever President Julius Maada Bio travels, the public goes frenzy because they say they want their leader to sit and work. Others argue that he needs to travel to meet other world leaders and especially lobby business leaders to bring investments to the country.

Since the start of his administration, the President has been doing just that. Some of the trips have been under-reported by the media and others condemned.  However comes a special trip – the Russia-African Leaders Summit in Sochi, Russia, proved different.

The aim of the summit was to rejuvenate the once mighty Russia which ruled nineteen Soviet republics into a mighty empire. Although the USSR later fell in 1991 largely caused by former US President George Bush and Mikhail Gorbachev, his Russian counterpart, yet Russia has always been a power militarily.

Putin, a former head of the KGB (Russia’s Spy Agency) equivalent to the CIA (America’s watchdog), was however not very happy the way and manner his country has been manipulated by the West and sunken to low ebbs. Therefore he has always wanted to resurrect the country in a new model. Putin believes that Africa was and is a good ally of Russia as the latter has supported regimes on the continent like Angola, Mozambique, South Africa freedom fighters etc. In Sierra Leone diplomatic relations between Freetown and Havana saw the training of many good doctors in the 70 and 80s in Moscow. The fisheries sector too was attractive to Russian interest.

With Putin facing challenges at home he needed a foreign show of strength for Africa’s economic potentials which its ideological counterpart, China, has used so well in Africa and enriched their people and country, partly.

Now Russia wants a new business in Sierra Leone and it was ready to start it with Africa. Speaking at the summit, President Bio told delegates that his country is a good destination with for ecosystem, business and investments; and there are also prospects for value-addition. Therefore investors could earn and repatriate profit to their countries peacefully, backed by full government protection with incentives that encourage businesses to grow.

In this light, he said the country was seeking closer partnerships and collaboration for development in human capital development – education, healthcare, and food productivity. “We are looking forward to strengthening and deepening ties and sharing a future that would be based on mutual trust and respect in all fields”, he said.

He reminded his colleagues that Africa and Russia share a strong sense of history and solidarity. Russia’s long history of bilateral cooperation and technical assistance has transformed the lives of millions of Africans throughout the post-independence period. Africa and Russia are at the threshold of negotiating a new and promising relationship. Africa offers an increasingly integrated market of 1.2 billion people; largely untapped mineral, hydrocarbon, and fisheries resources.

“Investment opportunities in tourism, infrastructure and agriculture, and a talented youthful population eager to explore the power of science and technology, and innovation for development. This is the new Africa at peace, integrated, and brimming with an opportunity that is open to Russia and which our individual governments are working hard to develop,” he said.

As Coordinator of the Committee of Ten African Heads of State, President Bio also used the opportunity to reiterate that Africa was firmly committed to the Common African Position on the reform of the United Nations Security Council and anticipated further discussions with the Russian Federation on the all-important issues in its relations with African states.

“Russia Federation has been a very good friend of Africa and we look forward to lowering all barriers to our relations while forging innovative, bolder, but closer, and mutually beneficial relations. As a continent and as a country, Sierra Leone looks forward to consistent and enduring partnerships with the Russian Federation,” he ended.