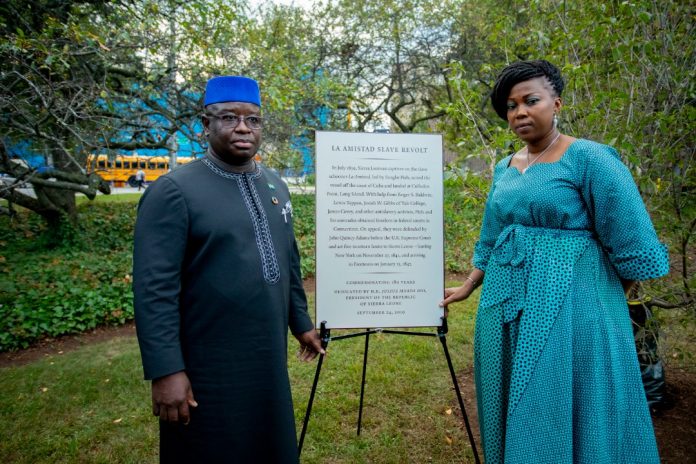 His Excellency President Dr Julius Maada Bio has commemorated 180 years of Amistad Slave revolt, during slavery, in the New Haven City, Connecticut, where he was also decorated with the Mayor’s Key award for outstanding leadership.

The said revolution of many Africans on the Spanish slave ship, La Amistad on 2 July 1839, was led by Sengbe Pieh, a Sierra Leonean of the Mende people and had important political and legal repercussions in the American abolition movement.

While welcoming President Bio, Mayor Toni N. Harp said that the respective histories of New Haven and Sierra Leone had been interlaced for centuries, citing his outstanding contributions towards the restoration of democracy and the attainment of peace in Sierra Leone.

“From the time of the Amistad Revolt and prolonged legal struggle to the Ebola tragedy of just a few years ago, the people of our two jurisdictions have enjoyed friendship, camaraderie, and respect – and these things that bind us have only drawn us closer over time,” Mayor Harp said.

In a short statement, President Bio thanked Mayor Toni N. Harp and officials from New Haven’s Amistad Committee and the New Haven Sister Cities Committee for not only providing a home to Sengbe Pieh and others but also for their support to Sierra Leone during the Ebola outbreak.

He told the audience that New Haven and Sierra Leone had been brought together by history and added: “This is a great story and you are a great people. Just like you did for Sengbe Pieh and others, your city has been generous to us. You have always believed in the dignity of the human being”.

He assured that he was also going to strengthen the relationship between Sierra Leone and New Haven City.

Later the Mayor led the President and entourage outside the city hall to a sculpture which served as a memorial to the 1839 Amistad revolt and its leader, Sengbe Pieh for the bravery and courage to emancipate themselves from the bondage of slavery.

To further commemorate this year’s Amistad revolt, the President also laid a wreath at the gravesite in remembrance of those Amistad captives who survived the voyage but became gravely ill and could not return to Sierra Leone with their compatriots in September 1841. At the gravesite, he also dedicated a tree in honour of Sengbe Pieh and other slaves and all those who helped them to regain their freedom.