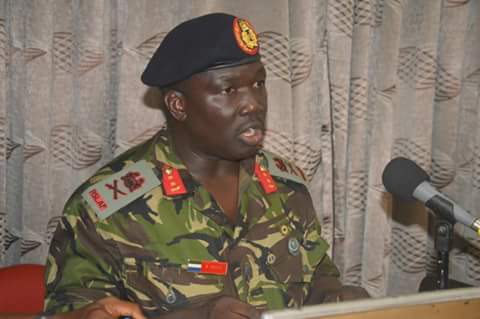 During a Press Conference held at the conference room of the Ministry of Defence on Tower Hill in Freetown on Thursday 26th September 2019, Staff Officer Grade 2 of the Defence Public Relations/Information unit, Major Yayah Brima told journalists that disciplinary action has been taken against seven military officers for their role in the escape of Captain Patrick Kamara from the main custodial centre at Wilberforce Barracks on 21st May 2019.

Reading a press release to the media, Major Brima recalled that the fugitive was standing trial at a Court Martial in respect of some missing ammunition together with some two other officers when he escaped. Whilst surprised at this act, the military then took swift action to determine how the captain could have escaped without detection.

During their investigations, 8 officers were detained for questioning by the Criminal Investigation Department (CID) and in the course of their investigations seven out of the eight were found to be culpable with the exception of RSLAF 18169779 Sergeant Tucker, who was exonerated for lack of any evidence to tie him to the crime. It was further disclosed that the CID report dated 12th June 2019 was directed to the Director of Public Prosecution (DPP) for Legal advice.

The DPP’s legal advice dated 2nd July directed the RSLAF to institute disciplinary action against the said officers with the exemption of Sergeant Tucker, who was set free.

The Ministry of Defence Press Release further stated that the 7 officers were given the following disciplinary actions:

These are believed to have failed to adhere to Standard Operating Procedures at the Custodian Centre.

The press conference further dealt with other media related matters in which they debunked publications in the Salone Times newspaper about some missing Le100 million.

This, they maintained, is false and baseless, as the officer quoted by the paper to have produced statement of account to the Parliamentary Oversight Committee, was not in that meeting in the first place and no statement of account was presented to the committee, nor was he in any way connected with any financial transaction at the 34 hospital. They further requested that the paper do a retraction of the said publication.

Light was thrown on another matter raised by one Beneta Kargbo; a mother who gave birth to a kid and lost him shortly after delivery, but after 14 months accused 4 medical officers at the hospital of stealing her baby. According to the press release, the MOD explained that the lady came to the hospital in pain and after delivery, the baby developed a breathing problem and after several attempts at resuscitating him to no avail, a death certificate was then issued to the mother on her discharge from the hospital.

The MOD further stated that on legal opinion of the DPP, after thorough investigations, the mother was said not to have any case against the said officials and they were released.

Other issues included the establishment of a new brigade in Eastern Sierra Leone and recruitment of more female officers into the army and deployment of other female officers on peace keeping missions.