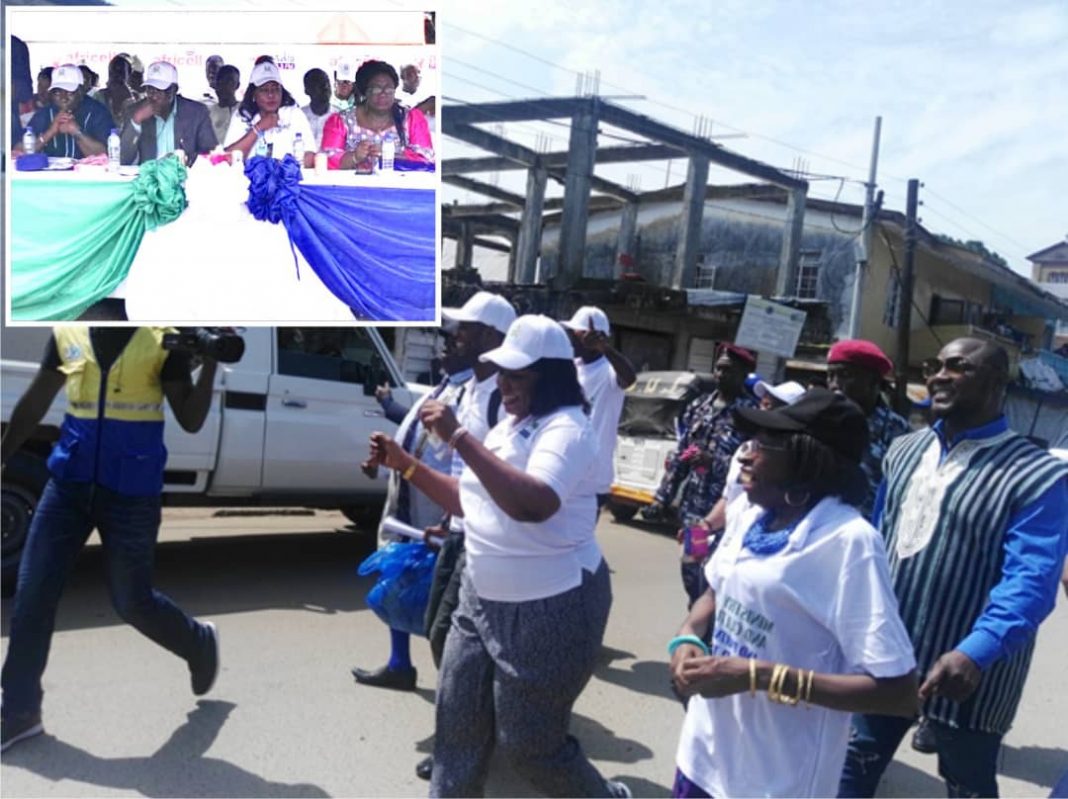 The Ministry of Tourism and Cultural Affairs on Friday 27th September, 2019 joined the world to celebrate World Tourism day with the theme: “Tourism and Jobs: A Better Future for All” at the Youyi Building car park in Freetown.

Minister of Tourism and Cultural Affairs Memunatu Pratt addressing the gathering said that her Ministry is working tremendously to ensure that they put Sierra Leone on the map in terms of Tourism and called on Sierra Leoneans to support her in the drive to revamp the tourism sector in the country.

She disclosed that celebrating World Tourism Day with the theme: “Tourism and Jobs:A Better Future for All” shows that the tourism sector has the potential to create jobs that will reduce the employment rate in the country which in return will contribute to the economy of the country.

She thanked His Excellency President Bio for making tourism one of his major priorities in the New Direction Manifesto, adding that Sierra Leone was ranked 136 out of 139 countries in the global index but disclosed that she is proud to say that the ranking has changed due to the relentless work her Ministry has been doing.

She added that her Ministry has been making numerous moves and strategies for the past one and half year to place Sierra Leone tourism on the international platform, and presenting it as one of the preferred tourism destinations in the world, adding that marketing the country’s tourism potentials and making efforts to reduce barriers of travelling to Sierra Leone, through the implementation of the visa on arrival which many consider is a laudable initiative.

She thanked the World Bank, United Nations Development Programme (UNDP) through the Government of Sierra Leone for their tireless support towards the Tourism Ministry.

He added that the purpose of celebrating this day is to inform and raise awareness to the various communities about the importance of tourism and its socio-cultural, political and economic values which resonates with His Excellency President Julius Maada Bio’s New Direction Agenda of diversifying our economy through tourism and the other growth sectors.

He said that the theme for this year’s celebration “Tourism and Jobs: A Better Future for All” is a clear manifestation of Government’s preparedness in addressing emerging issues by aligning national interventions to that of the country’s international partners. It aims at providing more jobs for the youth and women in a bid to continue to reduce poverty.

He furthermore said “Tourism and Jobs: A Better Future for All” is exactly synonymous with the nexus of our fiscal year budget which is the provision of jobs and the development of human capital, adding that this serves as an inspiration and clarion call to our youths and women to prepare themselves to take up both skilled and unskilled jobs to address the various unemployment challenges, especially in the informal sector.

He said that as a Government they will continue to reaffirm their commitment in diversifying the economy through tourism and other growth sectors with the sole aim of improving the living standard of each and every Sierra Leonean. He called on the local and internal business people to invest into the industry which ,he said, is a rich market, adding that their investment in this direction will enhance socio economic growth by stabilizing and increasing our foreign exchange earnings.