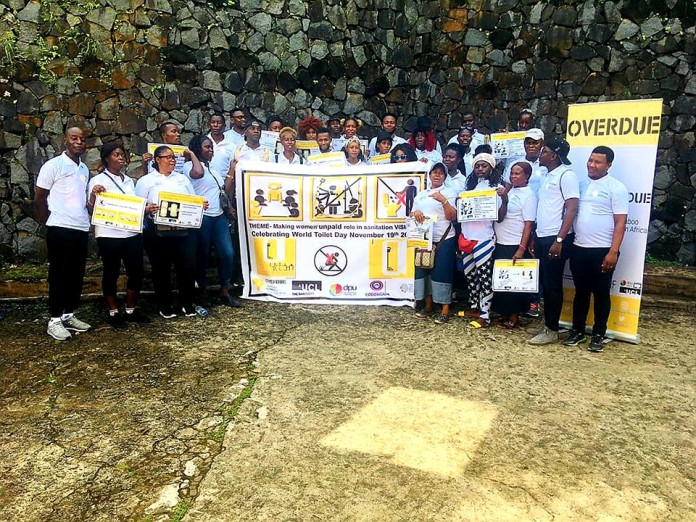 Sierra Leone Urban Research Centre, in partnership with CODOHSAPA, FEDURP, Freetown City Council, Directorate of Environmental Health and Sanitation (MOHS) and other partners, has commemorated World Toilet Day with a sanitation tour and other activities in three case study areas (Dwarzack Abacha Street and Eastern Police Market area, and Colbot community), on the 19th November 2022, to celebrate the unpaid work women are doing in terms of sanitation as part of their OVERDUE Project.

The Freetown theme for this year’s celebration is, ‘Making women’s unpaid role in sanitation VISIBLE’ which focuses on the impact of sanitation crisis on groundwater, exploring how inadequate sanitation systems spread human waste into rivers, lakes and soil, polluting underground water resources.

Series of events were held to commemorate the day which included a sanitation tour to the three case study areas (Dwarzack, Abacha Street and Eastern Police Market area, and Colbot community), holding cards, that displaying key messages and acting short sanitation practice skits, radio and TV discussions amongst others.

He revealed that the objective of the project is to interrogate the trajectories and possible pathways to tackle the sanitation taboo across African cities. Furthering it is a task at the core of the Open Defecation Free campaign and the 2030 SDGs, especially SDGs 6 and 11, with explicit consideration of gender relations, and disproportional impacts upon women and girls.

Mr. Koroma maintained that women have been playing  great roles in sanitation at both household and community levels with no pay as compared to men continuing that, most times women are under -represented in sanitation decision-making, governance and management structures.

He noted that women do the vast majority of the unpaid work in homes which include childcare, caring for the sick and the elderly, cleaning of sanitation facilities, disposal of buckets toilets, and collecting water for sanitation.

“Their unpaid work in sanitation has been an essential instrument in ensuring safer and sustainable sanitation within households and communities.” Mr. Koroma stated.

He continued that, “On a dint of this, the Freetown OVERDUE project team thought it fit to make visible women’s unpaid role in sanitation, and to raise the awareness of women inclusion in sanitation management and governance structures at all levels to ensure safer and sustainable sanitation.”

Abdul Rahman Parker, Sanitation Officer, Freetown City Council, stated that women carry the main burden of caring in communities and, according to him; they care for those who are sick often due to the spread of diseases as a result of poor sanitation infrastructure.

He maintained that although women are the main sanitation users, they are however excluded from meetings and decisions around sanitation.

The commemoration was climaxed with the giving out of certificates to women working in community toilets, to appreciate them for the invisible work they are doing.