On Wednesday 9th October 2019 the 50/50 Group, in partnership with Search for Common Ground and supported by the European Union (EU) launched the project titled: ‘Beyond Politics of Men: Empowering Women to be Effective Political Actors in Sierra Leone’ targeting Women in Politics and Leadership of Political Parties in Kenema, Kambia and Tonkolili Districts.

Officially launching the project, the Head of Delegation of the European Union in Sierra Leone, Mr. Tom Vens revealed that EU supports projects with values and principles, gender and equal rights, democracy and fundamental freedom. That the project would strengthen women’s participation in politics, that the House of Parliament does not represent the views of men and women equally and that Sierra Leone is rated 144 out of 192 countries with a low percentage of female politicians.

He furthered that there are many reasons for low female representation in politics and the decision-making process citing the 15% of women in Local Councils in Sierra Leone affirming that this should change and underlined that democracy should encompass the views and needs of all stakeholders.

All the speakers were optimistic that the project will lead to increased participation of women in political and public life as well as reinforce the long-held view that there is a need for dedicated long-term support to enhance women’s political participation. Furthermore, by supporting political parties to reform their policies and change their norms, a framework will be laid for a long-term transformation of the political structure in Sierra Leone and give women the capacity and confidence to effectively engage in politics.

Dr. Fatu Taqi, who chaired the ceremony, enlightened that the project is to prepare women ahead of the 2023 elections and beyond to have equitable distribution in terms of representation and the decision-making process to move the country forward underscoring that women want to walk side by side with men as well as collaborate with them to produce good results.

The Founder and First President of the Group, Dr. Nimata Majeks-Walker emphasized that women want recognition to play their rightful role with boys and men in society and highlighted the report of the EU Election Observer Mission in the 2018 elections in which 29 recommendations were made and informed that the Head of the Mission was a women named Jane Lambert.

She also affirmed that the EU Election Observer Mission stressed in its recommendations that if the recommended reforms are successfully implemented they would help to consolidate peace and democracy in Sierra Leone recalling that the Mission also held discussions with the 50/50 Group during which they worked on the project to increase women’s participation in elections.

Dr. Aisha Fofana-Ibrahim, the Project Lead and Immediate Past President of the Group asserted that they have always been advocating for such long-term projects reiterating the need to start preparing women for elections 3-4 years in advance and commended the EU for the support stressing that they want to see more women in Parliament and Local Councils.

She said more women will be elected into Parliament and Local Councils in the next elections and even contest the Presidency and revealed that the project would target 225 women including current Members of Parliament (MPs) and Councilors.

Dr. Aisha Fofana-Ibrahim continued that the project would utilize the social media a lot to sell the women, tap women leaders to serve as mentors, support female MPs to visit their constituencies, provide MPs with interns to conduct research on their work in Parliament, increase their confidence to demand their rights, organize media programs for them to engage constituents, engage leaders of political parties to give women more symbols and noted that women are not in the mainstream of political parties.

The 50/50 Group, a non-partisan campaign for more women in politics and public life, established in Sierra Leone in 2001, intervenes in the domain of gender, political and governance processes.

It seeks to change community attitudes and perceptions to ensure greater support for women‘s participation. The 50/50 Group is leading the implementation of the 38-months Women’s Political Empowerment Project titled: Beyond Politics of Men: Empowering Women to be Effective Political Actors in Sierra Leone’ in partnership with Search for Common Ground, its long-term partner, with funding from the European Union Delegation in Sierra Leone.

The project will target women in politics and the leadership of political parties in Kenema, Kambia and Tonkolili Districts.

The vote of thanks was delivered by Haja Fatmata Fofanah while the question and answer session and the press conference climaxed the well-attended event. 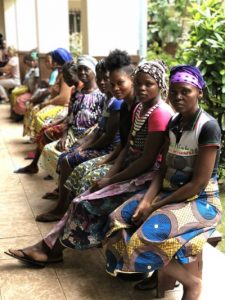