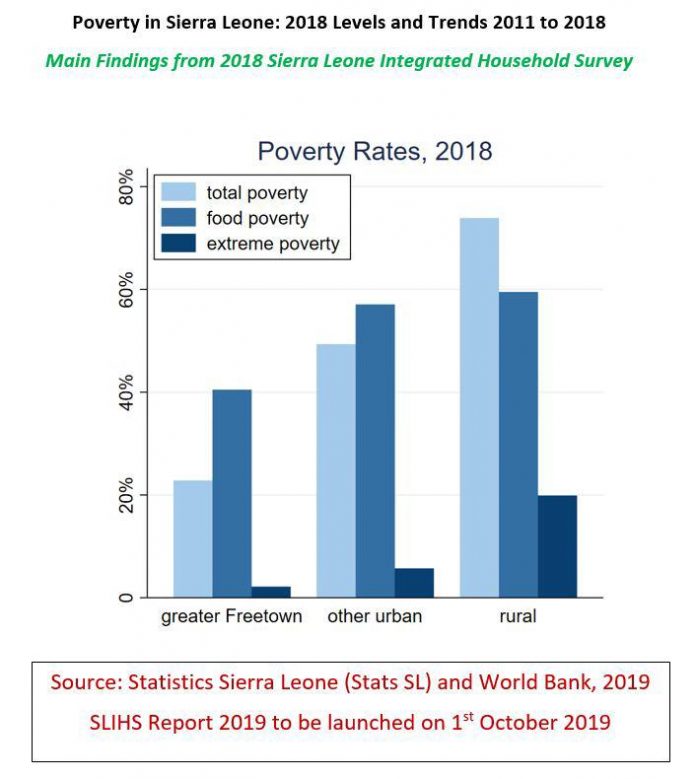 The 2018 Sierra Leone Integrated Household Survey conducted by Statistics Sierra Leone and the World Bank has revealed that Sierra Leone’s poverty stands at 56% in 2018.

The survey, which was conducted under the auspice of Osman Sankoh of Stats SL, the World Bank under Alejandro De la Fuente in Washington DC and Elizabeth Forster of the World Bank office in Freetown, made particular references to the 2018 levels and trends from 2011 to 2018.

Although, some of the findings have now been disclosed, the actual report would be launched on the 1st October 2019.

It was additionally maintained that Poverty is concentrated in the rural areas in Sierra Leone.  The rates in rural areas are more than twice as high as in urban areas, 73.9% compared to 34.8%.

In the findings it was highlighted that separating out Greater Freetown (all urban areas in Western Area), they discovered that  Freetown has a significantly lower poverty rate (22.8%) than other urban areas (49.3%).  Extreme poverty rates show an even greater disparity: the rate is 19.9% in rural areas and 3.8% in urban areas.

Food poverty rates show less variation and the rate for rural areas is quite close to the rate for other urban areas, showing that although those in rural areas are much poorer overall, they are no worse than urban dwellers (outside of Freetown) in terms of having sufficient food.  Poverty depth and severity (which consider not just whether households are poor, but how poor they are and inequality among the poor) show stark disparities between urban and rural areas.

It was again disclosed that the North is the province with the highest rate of poverty. Districts like Tonkolili, Pujehun and Falaba have the highest rates by district. Poverty rates are 64.1% in the East, 76.5% in the North, 62.3% in the North-West, 67.7% in the South and 23.3% in the West.  Poverty rates vary widely within province, however, and the three poorest districts (Pujehun, Tonkolili, and Falaba) span the far south, center and far north-east of the country. The least poor districts are Western Area Urban and Rural, Kambia and Bonthe.

Among the findings national poverty has decreased modestly since 2011 driven by decreases in urban areas. The new poverty rate of 56.8% is not directly comparable to the official rate of 52.9% in 2011, due to differences in methodology and setting a new (higher) poverty line for 2018. Adjusting for these changes, the team found out that poverty has decreased by 5.6 percentage points.